Holly Willoughby debuted much longer hair as she swapped her signature blunt bob for soft shoulder length waves on Friday.

The This Morning presenter, 41, took to Instagram to show off her tousled locks as she promoted her latest range with Marks and Spencer.

Joking that her new look was a result of the sunny weather, Holly, said that she was in a ‘summer state of mind’ as she modelled a stunning floral dress.

Holly Willoughby, 41, swapped her signature blunt bob for long tousled waves as she posed for her latest fashion campaign for Marks and Spencer on Friday

Holly looked as radiant as ever in the puff sleeve number with A-line skirt as she opted for minimal makeup for the photoshoot.

Alongside the snap, she penned: ‘A summer state of mind. New hair and new favourite pieces, courtesy of M&S!

‘This floral gorgeous-print dress is perfect for those warm summer evenings. Keep an eye out for more of my top picks over on!…All this Vit D’s making my hair grow.’ 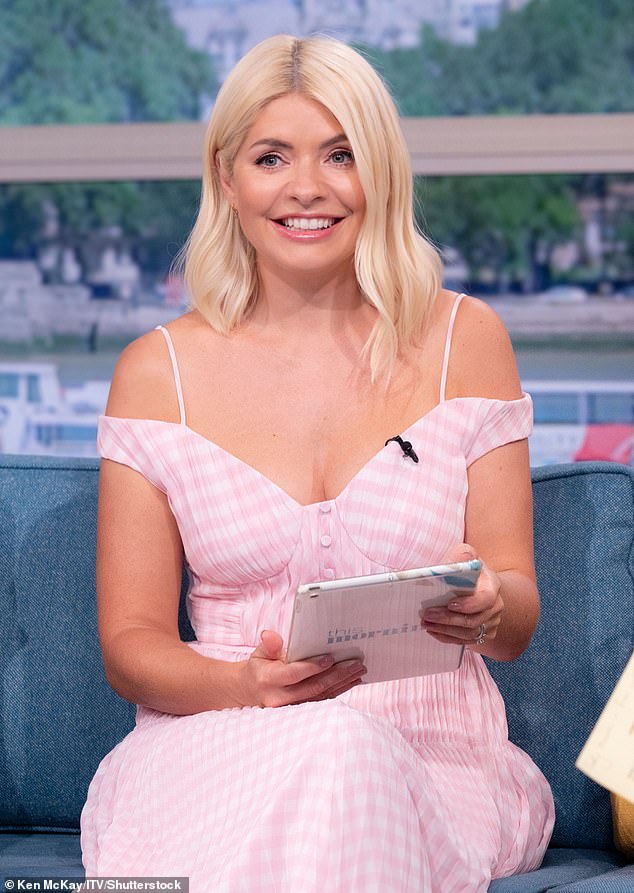 Signature look: Joking that her new look was a result of the sunny weather, Holly, said that she was in a ‘summer state of mind’ (pictured on This Morning last month)

It comes as Holly took to Instagram on Thursday with an uncharacteristically racy post as she marked her 15th wedding anniversary to her husband Dan Baldwin.

In the snap the presenter was swimming in a pool and wearing a pair of black bikini bottoms emblazoned with ‘Mrs Baldwin’ in silver sparkles.

Holly tied the knot with her partner, 47, at Amberley Castle in Sussex in August 2007. They now share three children Harry, 13, Belle, 11, and Chester, seven. In the image – which isn’t clear if it’s a throwback or current snap – Holly showed off her toned physique in the personalised swimwear.

Her pert posterior and lithe legs were on display in the bottoms while the bikini top was tied around her midriff.

She sported longer tresses that flowed behind her in the water as she swam along.

The blonde beauty wrote in the caption: ‘Mrs Baldwin 4 ever… ❤️ #15yearsmarried #love’. 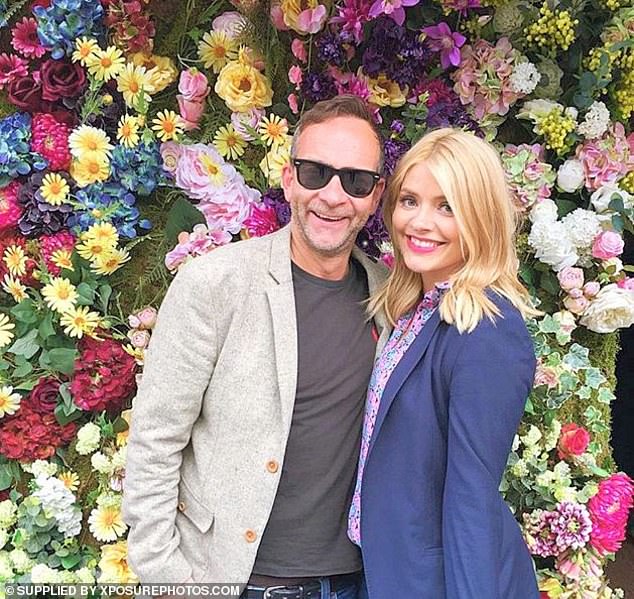 It comes after late last month Holly recalled how she ‘burst into tears’ with stress in the days leading up to her wedding to husband Dan.

Holly discussed her special day in an Instagram video and in an interview on her Wylde Moon website as she and Dan prepared to celebrate their 15th anniversary.

Recalling her emotions leading up to the big day, Holly said: ‘We definitely had weather stress! Like many venues the castle event space was mainly in the grounds and whilst you’d think you’d be safe with the weather in August, I can remember that summer was one of the wettest on record.

‘Shortly before the wedding, I was working with Fearne [Cotton] and spotted one of the crew reading a newspaper with ‘5 Days Until Summer Begins’ splashed across the front page. I was getting married in 5 days! I burst into tears.’ 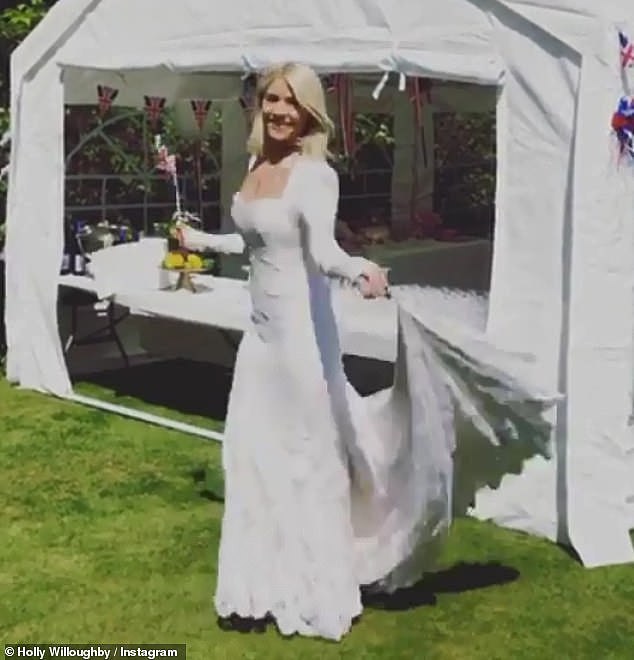 Memories: It comes after late last month Holly recalled how she ‘burst into tears’ with stress in the days leading up to her wedding to husband Dan (pictured in her wedding gown in 2018)

Speaking about her fond memories of the day, she added: ‘It feels like a very long time ago, we have been married 15 years this year so it feels very special. Those memories are still as fresh as they were on the day.

‘It is a special, special time from the dress, to walking down the aisle, to the smell of those flowers that you will never forget, to seeing all your loved ones in one place.’

‘Just a complete celebration in its purest form.’

The star revealed she wore a 1960s-style bunny girl corset underneath her dress on the day. 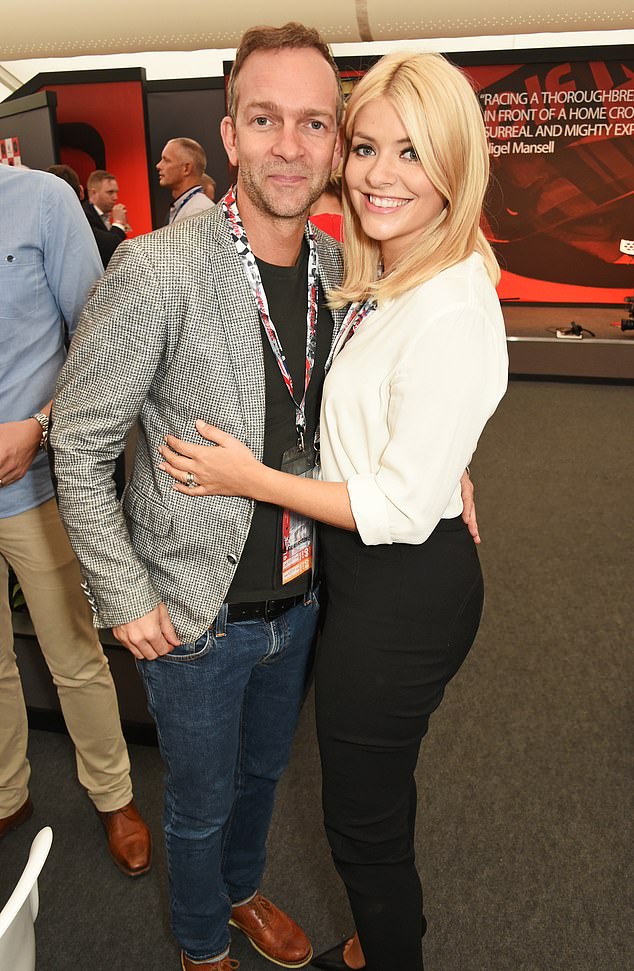 Emotions: Holly discussed her special day in an Instagram video and in an interview on her Wylde Moon website as she and Dan prepared to celebrate their 15th anniversary (pictured in 2016)

She said: ‘It’s obviously very important to get your underwear right under your wedding dress, and even more so with a backless dress.

‘My amazing dressmaker had a vintage pattern for a bunny girl outfit. She adapted a 1960’s original bunny girl corset by cutting the back so low, it didn’t show.’

Holly also said that she spent much of her wedding day itself in tears, particularly the moment when she first walked into the church.

She said: ‘Those hours before you get married are crazy and your head can’t possibly process the day you are about to have.

‘It was a magical, nervy morning getting dressed with my mum and my sister, and I’ll always remember the moment my dad walked in when I was ready to go and he burst into tears.

‘It immediately set me off. I’ll never forget the overwhelming feeling of love that hit me as I walked into the church and everyone turned around and smiled. That’s just unforgettable!’ 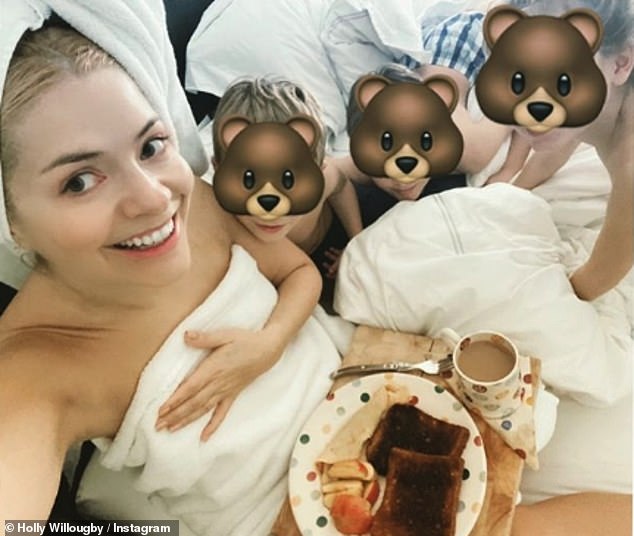