Fashion designer Diane von Furstenberg, 75, stunned fans with a new selfie in which she showcased her enviable figure in a bold red swimsuit.

The 75-year-old fashion icon chose to get candid with her 342,000 followers on Instagram when she shared the image, which sees her standing in front of a full-length mirror in a red swimming costume.

The make-up free designer then revealed she was working on her body confidence and had been putting in the work to maintain her figure.

Causing a stir: Diane von Furstenberg showcased the result of her figure in a swimsuit selfie that has wowed fans 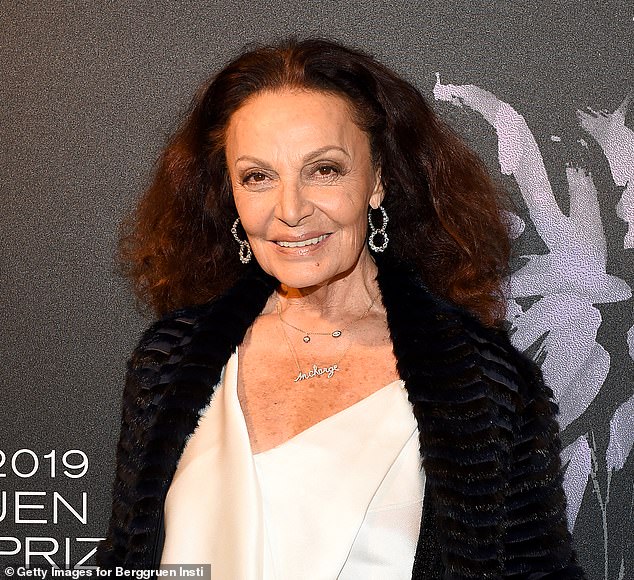 Candid: The fashion designer also revealed that she swims for two hours every day in order to keep fit

‘Selfie at 75? Trying to own it and 2 hours of daily swimming helps! I know I should smile but I feel stupid smiling at myself! Gratitude,’ Diane explained in the caption.

The post was immediately met with praise from friends and fans as supermodel Iman commented: ‘Fearless & Beautiful.’

‘At 75 fearless living starts,’ another commented, as another follower gushed: ‘So fabulous in every way stunning.’

Another added: ‘You look sensational! You truly inspire me.’ 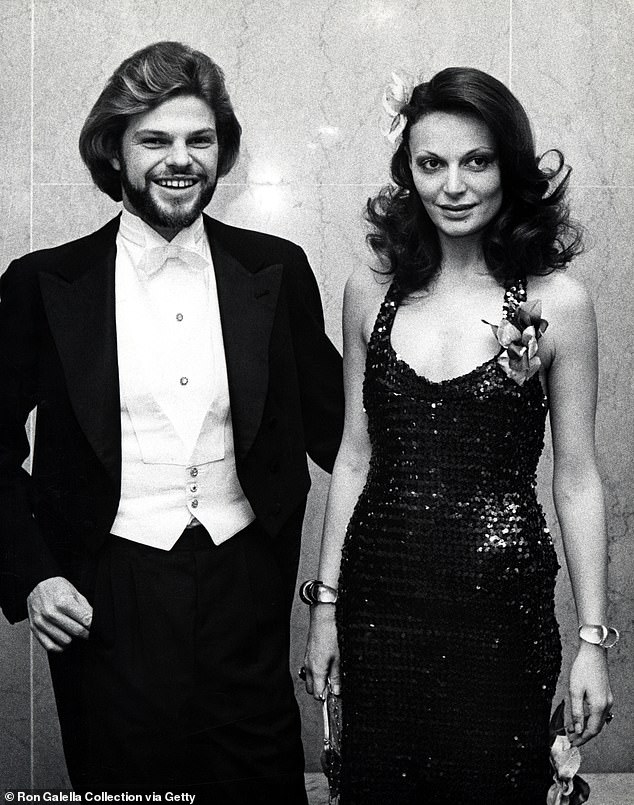 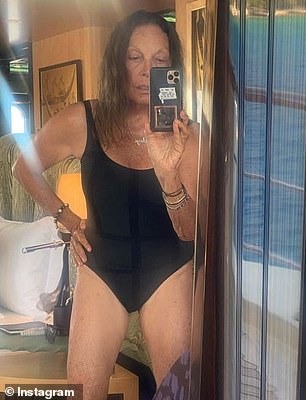 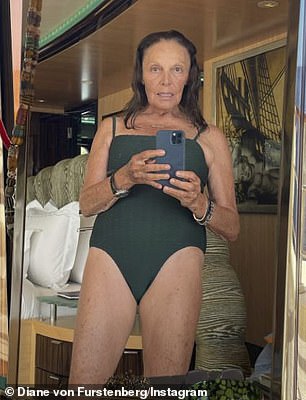 Open communication: The designer has been sharing the swimsuit selfie regularly in recent years. Pictured in August 2020 (left) and in January 2021 (right)

Showing appreciation: The designers followers flocked to the comments section to shower the designer with praise

One follower praised the designer for being so open as they wrote: ‘Thank u for being authentic and secure – still elegant and beautiful.’

The City star has been sharing the swimsuit selfies regularly while onboard her husband Barry Miller’s super yacht Eros.

In comes after the fashion designer has spent many decades focused on maintaining her health and looking after her body.

At 47, DVF was diagnosed with cancer, after finding a malignant lump in her throat. 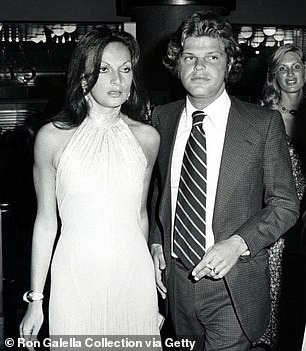 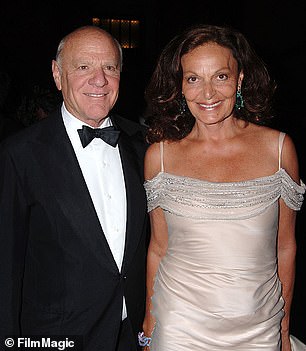 Romance: Diane split from her ex in 1983 but kept his name for her business (left) and pictured with her current husband Barry Diller (right) 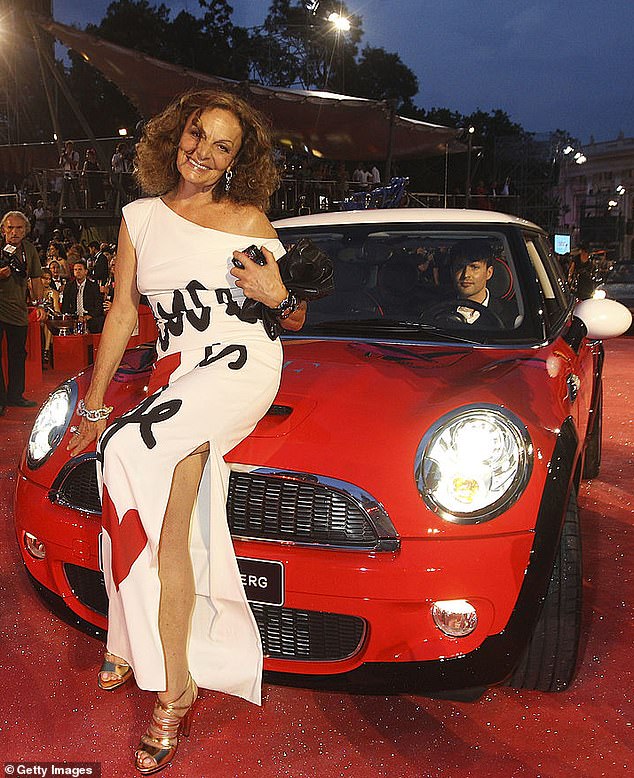 In good spirits: The fashion designer has spent many decades looking after her body after battling cancer at 47 – pictured in 2010

She was ‘terrified’, she admitted when previously reflecting on her health battle. ‘But I do believe that fear is not an option, so I always try to face it and not be afraid.’ 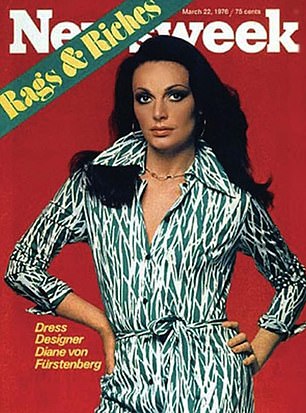 Impact: When she first launched her fashion label, the instant success saw her grace the cover of Newsweek magazine aged just 29

Surgeons want to remove part of her jawbone and cheek, cut off half her face. However, she refused and opted for radiation.

DVF even consulted health guru Deepak Chopra, who taught her to meditate and heal herself of the radiation burns on her face and back, a sore throat, and mouth blisters.

Once she was done with radiation therapy, DVF switched to a largely organic diet, with little meat or sugar.

Diane has been an enduring icon in the world of fashion after her wrap dresses took the industry by storm in 1974.

Celebrities from the Duchess of Cambridge to Gwyneth Paltrow and Madonna have been seen in her creations over the years.

Indeed, the designer once known as Her Serene Highness Princess Diane von Furstenberg is now dubbed the ‘Queen Mother of Fashion’, an international philanthropist and business powerhouse estimated to be worth $450 million.

The Belgian-born daughter of a Holocaust survivor, Diane married into European royalty and launched a fashion stable so successful that she made the cover of Newsweek magazine aged just 29. 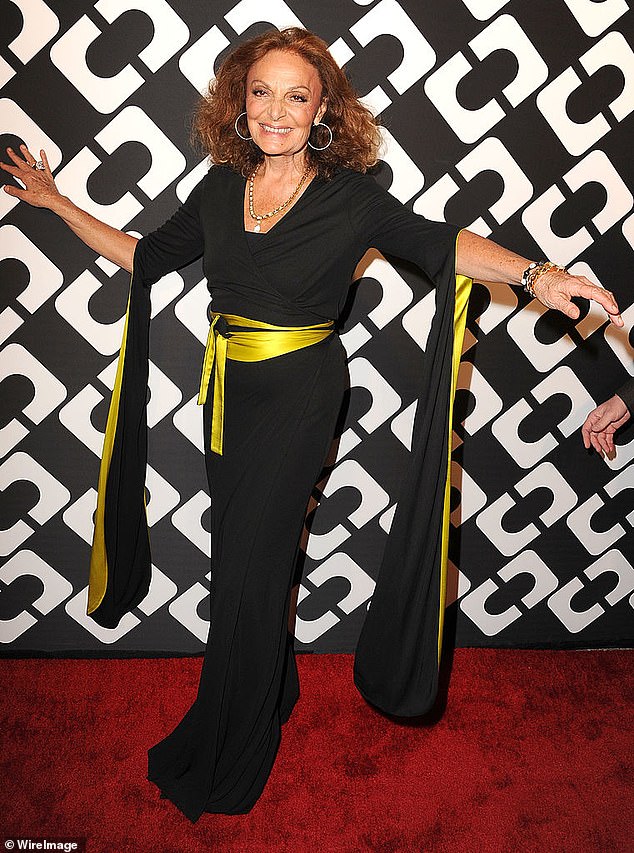 Radiant: The Belgian-born daughter of a Holocaust survivor married into European royalty before she became known as the ‘Queen Mother of fashion’ in the 70s and 80s – pictured in 2014 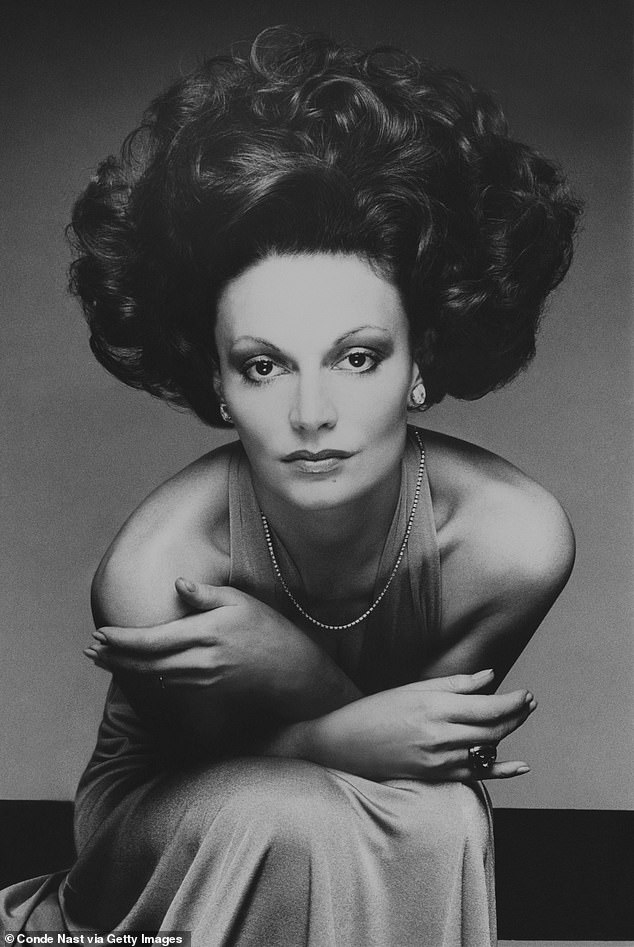 Natural glamor: The designer, once known as Her Serene Highness Princess Diane von Furstenberg, posing for Vogue in 1974

By 1989, Diane’s annual income had slipped to $1million as her brand became passé.

However, she reignited through the uncool medium of the home shopping TV channel QVC, on which she would appear to sell her new clothing ranges.

By the mid-Nineties, her flag was flying high again, in some part thanks to many millions invested by Diller.

In the years following that, she even starred in a fashion reality TV show called House Of DVF as well as featuring in MTV’s The City.