He’s so golden. Harry Styles’ Don’t Worry Darling wardrobe is stunning. The 28-year-old singer and actor looks sleek alongside co-star Florence Pugh in his new movie, however, there’s more than meets the eye when it comes to the psychological thriller’s costuming.

The film offers a glimpse into the life of Alice (played by Pugh) and Jack (played by Styles) who live in the idealized, fictional community of Victory. CEO of the Victory Project, Frank (played by Chris Pine) implements 1950’s societal optimism in the desert utopia with the help of his wife, Shelley (Gemma Chan). According to Warner Bros., the film’s synopsis is as follows: “While the husbands spend every day inside the Victory Project Headquarters, working on the ‘development of progressive progressive materials,’ their wives get to spend their time enjoying the beauty, luxury and debauchery of their community.”

Don’t Worry Darling‘s costume designer Arianne Phillips is a master of her craft. For her work for the film, she was awarded the Campari Passion for Film award at the 79th Venice Film Festival. Phillips is also an expert on period costuming having worked on Quentin Tarantino’s Once Upon a Time…In Hollywood and Alex Proya’s cult hit The Crow. On how she conceptualized the vision of the 50s and utopia with the film’s costuming, Phillips told Variety, “When I design a period film, I always love a mixture of made-to-order and the real thing. Unfortunately, there’s not a lot of originals from this time period that are in great shape.”

It took a whole team of costuming experts to execute the finely made tailored outfits that gave Victory its iconic look. “The ability to make mood boards digitally gave me a new way to express and create depth of character.” Victory had to give a very specific feeling, and as the story of Don’t Worry Darling goes on, Phillips revealed that there are clues in each character’s outfits.”[Costumes] can often be a device to distract from what’s really going on,” she says. “I used a lot of color control to guide tone and create the story arc.”

For director Olivia Wilde and Phillip’s vision, Styles was the perfect person to play Jack due to his luster personal style and overall interest in fashion. Wilde told Vogue“She [Phillips] and I did a little victory dance when we heard that we officially had Harry in the film because we knew that he has a real appreciation for fashion and style. And this movie is incredibly stylistic. It’s very heightened and opulent, and I’m really grateful that he is so enthusiastic about that element of the process—some actors just don’t care.”

Take a look at Harry Styles’ outfits in the film Don’t Worry Darling and from behind the scenes.

To show off the utopian vision of Victory, Phillips utilized a more light palette. “At first, I worked in a primary palette that was very bright and exciting. It was very reflective of Victory and that Palm Springs world that you think of when you see Victory.” Jack’s clean outfits exceedingly matched Alice’s flowy and vivid dresses. The two are deeply in love and life is perfect for the two of them. Alice is comfortable in her housewife activities and Jack becomes more certain in his job at Victory. On the way to work, Jack’s suits are perfectly fitted and tight, as purposed by Phillips and Western Costume’s Jack Kasbarian who made all of them. The jubilant colors are optimistic in their daily life and affirm that they live in a place where nothing should be questioned . 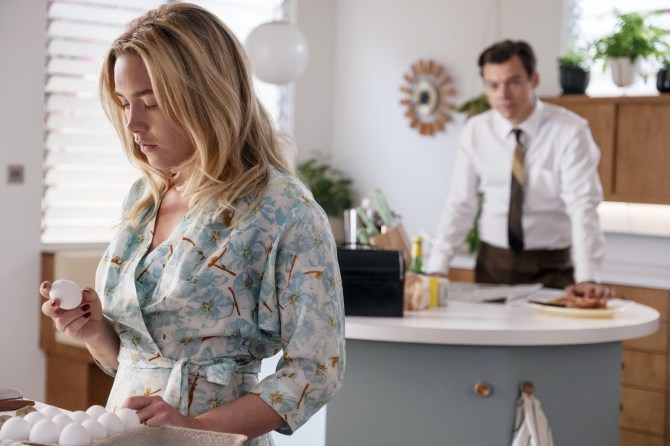 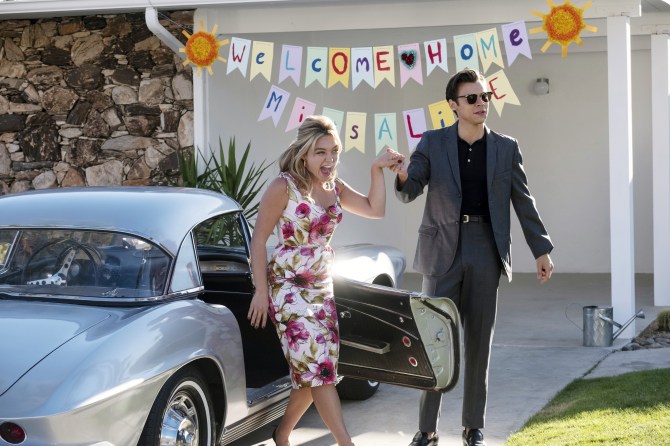 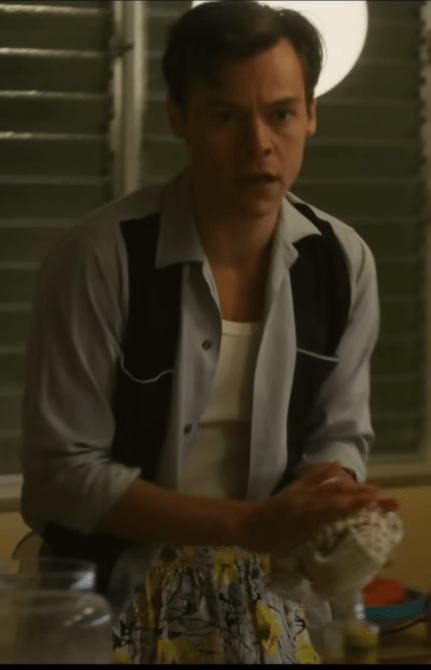 As Alice descends down the rabbit hole where she becomes skeptical of Victory’s intentions, she unravels more secrets and the life between her and Jack becomes more untidy and loose. Darker tones become more used as Jack’s involvement becomes more needed in the company, while Alice uses more beige tones and more natural makeup compared to the bright-toned clothes and makeup earlier in the film, according to Makeup Department Head Heba Thorisdotti. Things are looking unstable between the two as they argue more about what their purpose is. 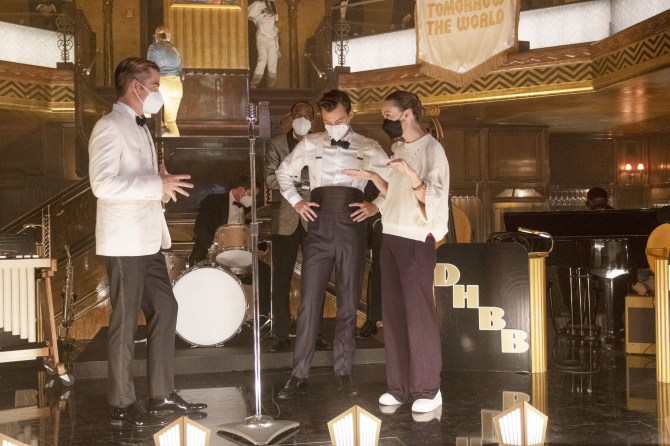 A celebratory event is held for Jack as he’s moving up the ranks at the Victory Project. The party shows the characters in monotone colors—something that is regal but also suspicious at the same time. It’s a perfect mask to seal what’s really going on in the town and the secrets that they won’t reveal to their residents. “You see how they’re dressed,” Philips says of the scene and the meticulous costuming, “and it tells you a little bit about them — when we dress up and show our best selves.”

Our mission at STYLECASTER is to bring style to the people, and we only feature products we think you’ll love as much as we do. Please note that if you purchase something by clicking on a link within this story, we may receive a small commission of the sale.