Serena Williams showed up to her final US Open wearing a custom black crystal-encrusted Nike outfit and a pair of NikeCourt Flare 2 sneakers with diamond Swooshes. Every part of the outfit was intentional. The six-layer skirt represented her six Flushing titles and the jewels were meant to mimic the stars in the night sky at the tournament. But her outfit also felt like a hint at what’s to come after her retirement from tennis: more fashion that gets people talking.

Just ten days after her final match, Williams held a Glam Slam during New York Fashion Week. Not to be mistaken for the Grand Slam—which Williams has won 23 times—Glam Slam is an experiential multi-day, tennis-themed event space launched by IMG and Spring Studios. The experience started with a 20-minute Q&A with BAZAAR‘s very own Nikki Ogunnaike, and was followed by a presentation of Serena’s favorite fall looks from her brand, S by Serena.

“All I have done is work for literally my whole life, and I just started exploring this freedom. When people retire from tennis, everyone always says they’re free. So I guess I’m free now,” Williams told Ogunnaike.

What form will that freedom take? Williams isn’t sure yet. “I guess I don’t know what my freedom is going to be like. I’m really excited to explore that and talking about fashion and getting to dive deep. I ‘ve always been into fashion—I went to school for it but most of my whole life has been dedicated to tennis and I’ve never been able to fully focus on things I have such a passion for. So these collections are about to get really insane.”

Her daughter Olympia, age 5, will most likely be involved, too. “Some people don’t realize some of the design process is an item that Olympia picked,” Williams laughs. Often, she’ll offer the deciding vote on a color or a dress. 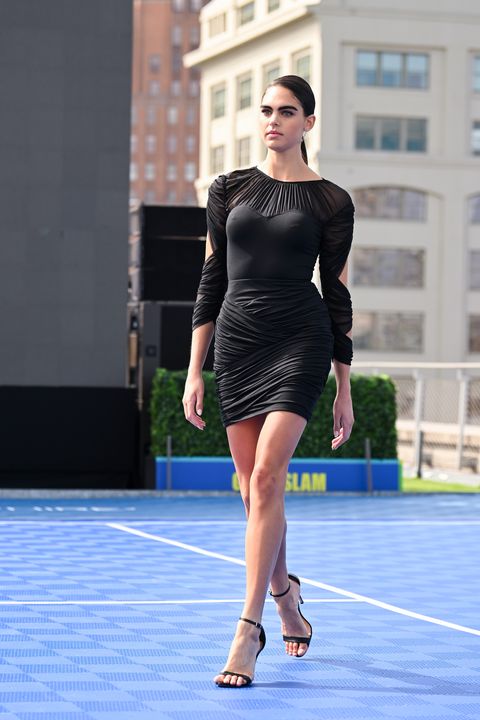 Williams’s love for fashion is infectious, and although she selected all of her favorite looks from her collections for the presentation— a “Serena’s picks” as she calls the edit— it wasn’t easy to choose. “I would say the first model that walks out is a must-have, the Landry. I love how the arms and the sleeves are on that. It’s gorgeous and a major must-have. That’s why she’s walking out first!” As for what she wears when she wants to feel her best: “Something tight and right! I can always rely on something tight and right.”

It hasn’t even been two weeks since Williams played what she has called her last game, but people still can’t help but wonder if she’ll ever return. “No breaking news today!” she assured everyone at the presentation. ” I absolutely love tennis, but you have to know when to hold ’em and when to fold ’em, and you have to know when it’s time for fashion.”

Tara Gonzalez is the Senior Fashion Editor at Harper’s Bazaar. Previously, she was the style writer at InStylefounding commerce editor at Glamour, and fashion editor at Coveteur.