Eli Manning is back as he continues to explore the world of college football in a brand new season of Eli’s Places on ESPN+. After this brother Peyton took us through the NFL and several other athletes – like Abby Wambach, Vince Carter, David Ortiz, Ronda Rousey and others – took us through their respective sports, it’s time to dive back into some football.

The sixth episode, titled “Who Wore it Best?,” sees Eli exploring the world of football fashion. In order to do so, he gets some help from the stylish quarterback, Cam Newton, and fashion icon Tim Gunn, as they all take us through the history of the football uniform.

Eli is known for a lot of things. Fashion is not one of them. So when Eli heads to the New York fashion district to look into the fashion of football, Cam Newton is surprised to see him there. The former Heisman Trophy winner agrees to help Eli to teach this class on fashion.

After seeing some highlights of Newton’s college career and some of his best press conference outfits, he sits down with Eli to provide some fashion tips. Newton explains that there are no rules in fashion and that anyone can were what they’re comfortable in, but he does take some time to knock Eli’s country club look.

The conversation then turns to college football uniforms. Eli points out that the NCAA doesn’t have the same rules as the NFL, which allows for teams like Oregon to have a different uniform every game. Newton admits he considered going to Virginia Tech just because of their uniforms. 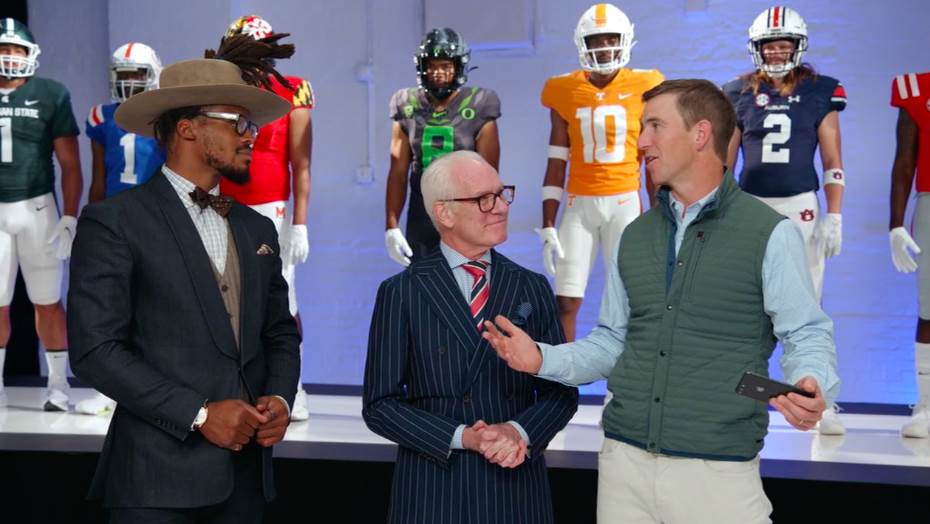 The pair of quarterbacks are then joined by Tim Gunn for a football fashion show and history lesson. Peyton dons the original Princeton University uniform, a black sweater with an orange P and some striped socks. He explains that those socks actually led to the first ever college nickname: The Princeton Tigers.

Eli continues to take us through the history of the football uniform, which involved several costume changes. We get to see the introduction of numbers to the uniform, friction strips, the rubber nose guard and the first plastic helmets. Tim Gunn looks as though he is going to have a heart attack on several occasions after seeing the uniforms and accessories.

Despite some bad acting from the trio, this was a fun segment to end a very straightforward episode. It was an interesting look through the history of the game’s uniforms and some of the best of today. And if anything else is accomplished here, the episode serves as a good audition for Newton to get his own show on sports fashion.

You can watch Eli’s Places on ESPN+ now. Fans can subscribe to ESPN+ for just $6.99 a month and can cancel at any time.