Guests gathered on Pier 76 for the luminous presentation, where elevated sportswear meshed with ’90-era silhouettes

As the Fashion Week crowd piled onto Pier 76 on a cloudless Thursday evening, everyone was muttering about how glorious the sunset was. Extending a palatial distance out from the shore, the pier facilitated a ravishing and effective mise-en-scène, which contextually informed Burch’s inspiration for the season: light—denoting the golden rays that illuminate, and an ethereal airiness that negates gravity.

The show notes, printed on square sheets of cardstock and handed out to guests like flyers, were topped with a large, luminous yellow-and-orange gradient circle. The graphic design demonstrated strong optical saliency: It bore witness to the ebbing of a clear summer day, and more importantly, acted as a subconscious nod to prevailing digital-age visual cues, such as the logos and app icons and branded typographies that pervade our cultural consciousness. 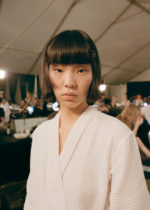 Despite the innumerous square-cropped sunsets, Tory Burch was confident that her rendition of a golden-hour spectacle wouldn’t seem overplayed or garish—and she proved herself right. Never shying away from her love for the McCardell-ian branch of fashion philosophy , Burch gravitates toward popular whims and trends, and insists on clothing’s wearability and ease. Affirming and embracing her nostalgia for ’90s-era NYC, defined by tattered layering and mismatched styling, Burch brought back the pared-down silhouettes of elevated sportswear.

In recent years, Burch has invented her own masterful recipe on how to make women’s clothes fit—or mis-fit. The models’ waists were simultaneously cinched and on the loose, hidden from view beneath drapey four-way stretch bandeaus. While the structured , mid-length tunics alluded to traditional, rigidly-laced bustiers, they fell gently to the hips, counterweighted by breezy silk chiffon and viscose jersey skirts. These silk textures were expressive and tastefully chosen: There was a shantung skirt embroidered with quadrilateral mirrored acrylics , and an electric blue lamé one that was adorned with frilly white lace. The most mesmerizing of the skirts were those sewn up with two differently patterned silk jacquards; the contradictory fabrics, together in one garment, became elegantly poised when paired with iridescent mélange- wool tunics, woven with cross-color threads. All in all, the materiality and textures were breathtakingly luminous—it was as if the clothes stole the sun’s glory as it descended the riverside. 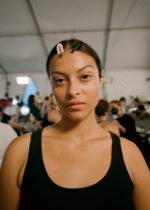 An enormous “celestial mobile” sculpture was suspended over the pier, as if it were descending to earth from the universe above. It consisted of a number of rods, from which large round mirrors hung and slowly rotated. The sculpture’s geometric dynamism was carried over to the collection’s accessories, which included dangly, modular earrings made up of cycloidal shards of varying size, and slingback sandals with asymmetrical toe rings. Not only did these details reinforce the show’s theme of reflection and refraction of sunlight—they also bore further reference to ’90s retrofuturism. By looking to the past, Tory Burch is calling out to a new sunrise.