Ciara has been in full promo mode during the entire six days of New York Fashion Week for her two clothing companies House Of LR&C and LITA By Ciara.

But on Wednesday, the final day of NYFW, the singer and entrepreneur took time out from her own entrepreneurial enterprises to make an appearance at the Michael Kors fashion show, which was then followed by an appearance to check out the new collection from Tom Ford.

All this moving and shaking amid the fashion world’s big week in Manhattan came one day before the launch of her new skincare brand, On A Mission, also known as OAM, which is set to officially drop on Thursday, September 15.

Seeing red: Ciara, 36, took a break from her own personal entrepreneurial enterprises and left her New York City hotel to attend the Michael Kors and Tom Ford fashion shows on Wednesday, which was the last day of New York Fashion Week

You could say Ciara (born Ciara Princess Harris), 36, was seeing red for her busy day, but for all the best of reasons.

The singer and dancer was first spotted leaving her New York City hotel decked out in an all-red ensemble that came complete with fitted pants and a velvet blazer with wings on the shoulders.

In keeping with the color and style theme, the Paint It, Black star also wore a red top, matching heels and leather gloves. 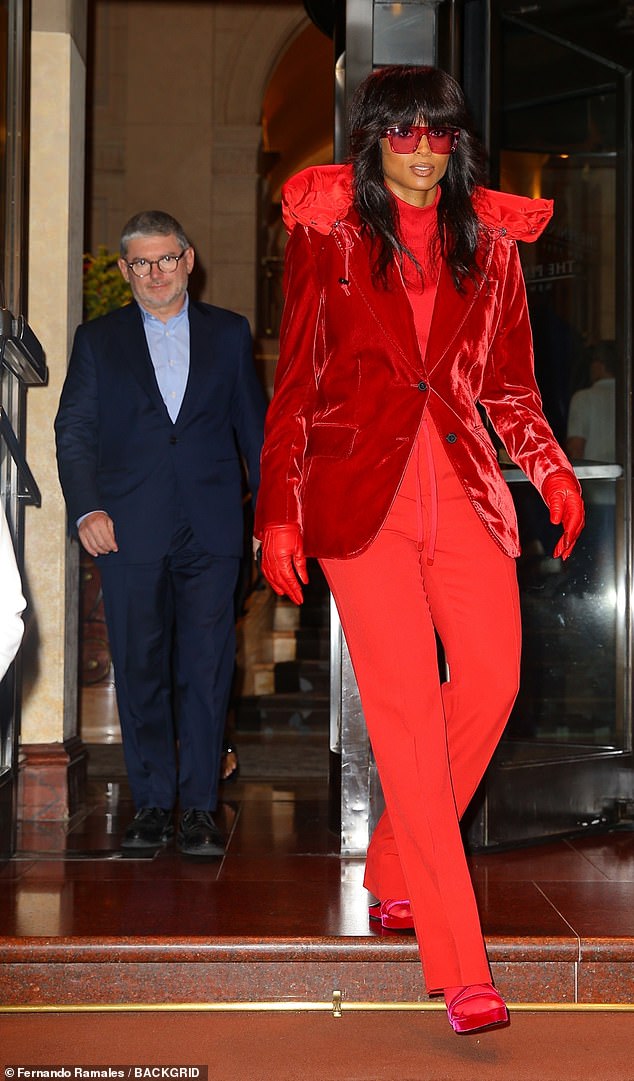 On the move: The singer and entrepreneur stepped out in a wild all-red ensemble, consisting of pants, winged blazer, and matching top, heels and leather gloves 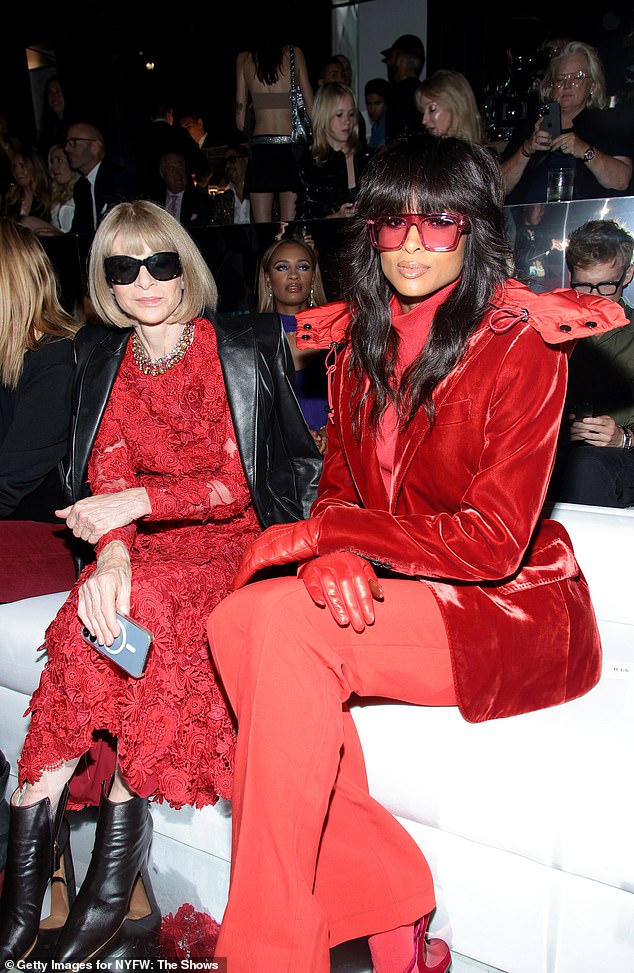 Fashionistas: After checking out Michael Kors’ new collection, Ciara made her way to the Tom Ford fashion show, where she sat next to British journalist Anna Wintour, who’s served as editor-in-Chief of Vogue since 1988 and Global CCO for Condé Nast since 2020

It didn’t end there. Ciara also sported red tinted glasses that would have made the Rocket Man, Elton John proud.

Rounding out her ensemble, the Texas native had her raven tresses styled long in the back and sides with major bangs in the front, along with a slight center part.

Ciara also made her way to the Tom Ford fashion show at Skylight on Vesey, where she ended up sitting next to British journalist Anna Wintour, who’s been New York based serving as editor-in-Chief of Vogue since 1988 and Global Chief Content Officer for Condé Nast since 2020.

Wintour, 72, stepped out for the event in a red dress, black boots and a black leather jacket over her shoulders, along with her trademark pageboy bob haircut 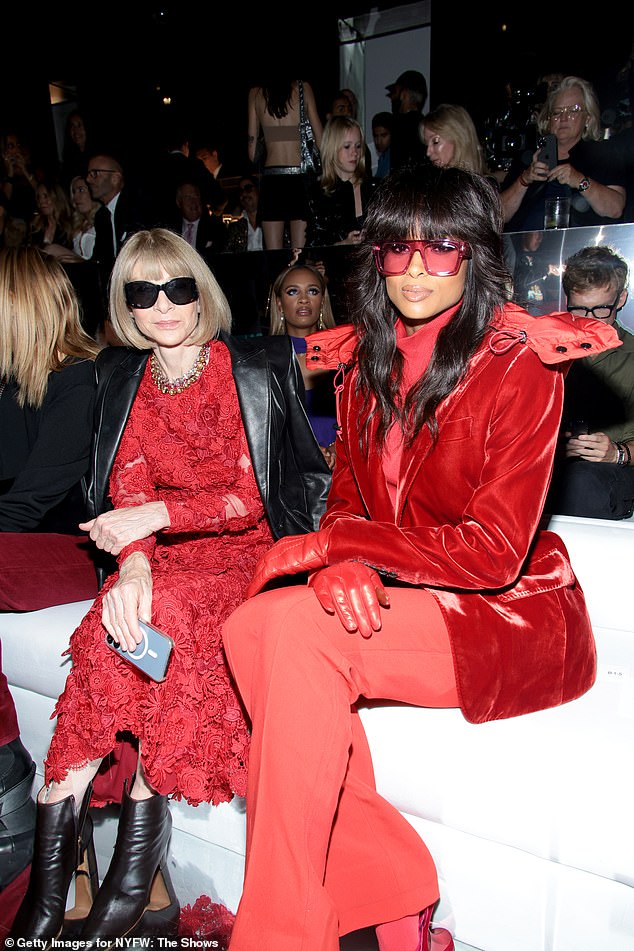 Classics: Wintour, 72, stepped out for the Ford show in a red dress, black leather jacket and matching boots, along with her trademark pageboy bob haircut

Afterwards, Ciara made a point of finding Ford for a quick chat and a few photographs together.

Ford, who launched his luxury brand in 2005, had previously worked as Creative director at Gucci and Yves Saint Laurent. 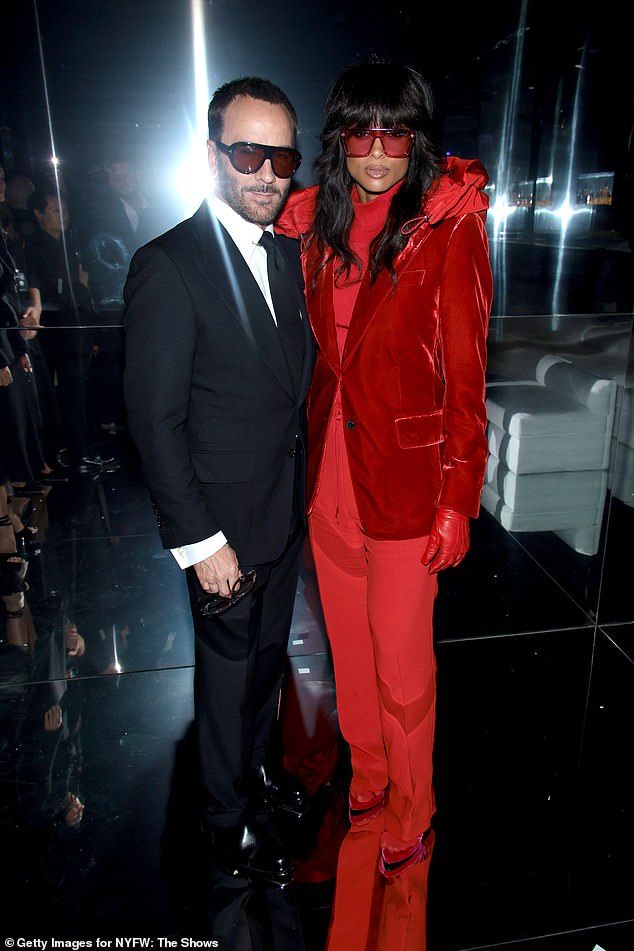 Fashionista of the hour: After his new collection was unveiled on the runway, Ciara made a point of chatting with Ford, who looked impeccably handsome in a black suit with a white dress shirt, black tie and matching dress shoes

Ciara got a jump start of NYFW last week by promoting her LITA By Ciara clothing line at the Revolve party in Manhattan.

LITA By Ciara, which launched in August last year, is an acronym for ‘love is the answer’. The singer took inspiration for the line from vintage staple pieces in her closet that she describes as tomboy-chic.

She also has been promoting her other clothing brand House Of LR&C, which she started with husband Russell Wilson, who also happens to be a Super Bowl champion quarterback who now plays with the Denver Broncos.

The latter part of the name ‘LR&C’ stands for ‘Love Respect and Care’.

Promo mode: While out and about this past week, Ciara has been getting the word out about the official launch of her skincare company, On A Mission

While out and about this past week, Ciara has been getting the word out about the official launch of her skincare company, On A Mission.

‘Come get unready with me! I used to feel my most beautiful with a full face of makeup. Prioritizing and taking care of my skin has boosted my own self-confidence and made me feel my best,’ she wrote in an Instagram promo video post on Tuesday, adding, ‘I have been consistent with my daily @OAMskin routine for the past couple years! I took my time with this and wanted the products to be a luxurious experience! OAM is clinical-level self care made simple, just for you.

She closed out the post: ‘Our Vitamin C system has leveled up my skin to get that POPPIN’ glow! The secret is coming 9/15. #oamskin.’

The OAM skincare line, which focuses heavily on cleansing, moisturizing and brightening the skin with an assortment of vitamins, has been a part of the mother of three’s dream list of things to accomplish, which will be realized the following day, she revealed in a interview with Allure. 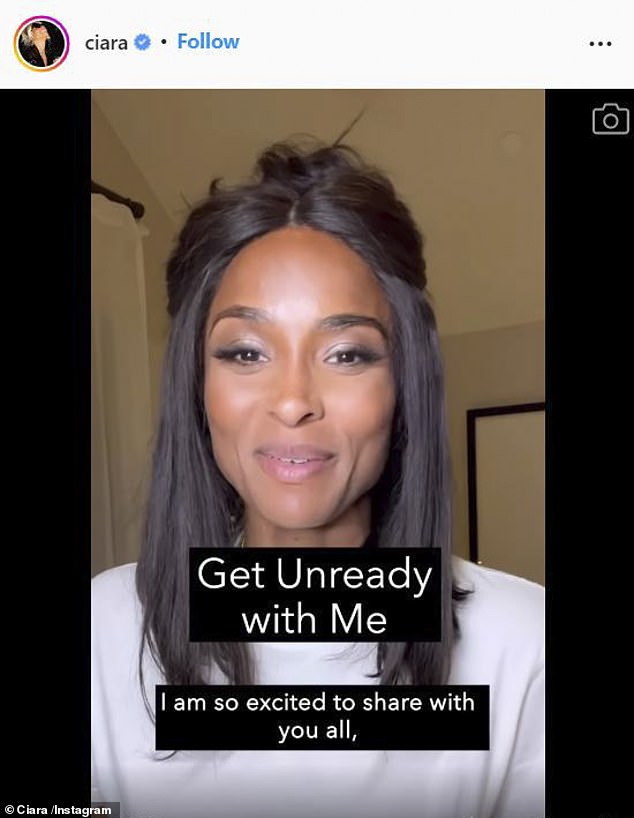 Promo mode: The OAM skincare line, which heavily focuses on cleansing, moisturizing and brightening the skin with an assortment of vitamins, has been a part of the mother of three’s dream list of things to accomplish, which will be realized the following day, she revealed in a interview with Allure