FOLLOWING ten days of mourning the royal family will put Her Majesty the Queen to rest on Monday at a state funeral in London.

This week we have seen the likes of the Queen Consort Camilla, Kate the Princess of Wales and Meghan Markle join fellow royal for the Westminster procession, as well as greet mourners outside Windsor and Buckingham Palace strictly sticking to royal fashion protocol and wearing head-to -toe black.

Naturally this will not change for the Queen’s funeral but what exactly are the strict style rules the royal ladies have to abide by?

According to Debrett’s – ‘a record-keeper and chronicler of British society, a publisher, and an authority on modern manners’ – a strict dress code is observed at state funerals.

Here, Fashion Editor Clemmie Fieldsend explains what else we could see… 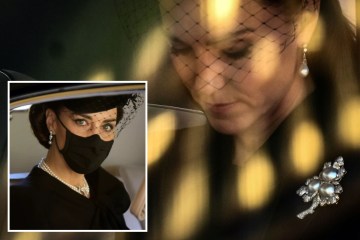 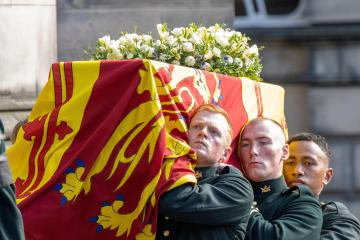 Hosiery is considered part of the unofficial royal uniform for women. While these days women generally go barelegged if the sun allows us, royal women still follow more old fashioned etiquette rules when it comes to their pins.

The Queen was never seen on an engagement without wearing nude tights and while Kate sometimes takes a modern approach by wearing black tights occasionally, it’s one fashion rule that’s not going to take a back seat during national mourning.

When Kate and Meghan joined husband’s William and Harry to greet well wishers in Windsor and attended the short service in Westminster Cathedral, the two ladies both paired black tights with their elegant black midi dresses. All the woman attending the service at Westminster Cathedral after the Queen’s coffin procession, were also in tights.

Adding that tights are “really the only hard, steadfast rule in terms of what the Queen requires”.

Many royal rules have changed since Queen Elizabeth came to the throne, for example royal family members are allowed to wear trousers at certain, more casual public appearances, but for the funeral everyone will be in dresses or skirts.

Royal hemlines are never more than three inches above the knee, however for the state funeral both Catherine and Meghan are expected to wear frocks that fall on or below the knee. For example, for Prince Phillips’ funeral Kate opted for a £1,065 Roland Mouret midi dress under a shin length Catherine Walker dress coat.

To prevent Marylin moments, royal women reportedly have small weights sewn into the bottom of their skirts. These are supposedly £2 for a pack of four from John Lewis and are circular lead curtain weights.

For occasions that involve mass members of the firm you can expect to see a lot of sentimental, passed down and borrowed jewellery.

We expect there to be white pearls, since the Queen’s death last week we have already seen Camilla and Kate wearing the precious stone for a very important reason.

Pearls are referred to as “mourning jewellery”, and this dates back to Queen Victoria’s reign.

Throughout her life the Queen amassed jewellery in the form of heirlooms, family treasures and gifts from world leaders.

The Queen was known for her vast collection of colourful hats in unique designs, and all the royal ladies will be expected to wear either a hat or a fascinator as they attend the Queen’s funeral.

The etiquette rule dates back to the 1950s, when it was seen as improper for royal women and upper-class ladies to show their hair in public.

In the past, Kate Middleton and Meghan Markle have often been seen wearing hats at events such as christenings, birthdays and weddings, and at more sombre events such as Prince Philip’s funeral and Remembrance Sunday.

Rachel Trevor-Morgan was the Queen’s milliner and is a Winsor favourite so could be a contending brand for the Princess of Wales and Meghan Markle.

Kate and Meghan have also worn hats by designers like Steven Jones, Jane Taylor and Phillip Tracey among others.

Irish designer Phillip Tracey was the designer of the black hat with a netted veil she wore to Prince Phillips’ funeral.

Although all royal women attending will be dressed in accordance with these traditions, Princess Anne is the one member of the family who may be dressed a little differently.

Princess Anne – The Queen’s only daughter – may be wearing her military uniform as per tradition, as royals have worn military dress at state occasions since the 19th century.

While the Queen was rarely seen without her Anello & Davide of Kensington calf leather mini heels with brass detailing Kate and Meghan have a broader collection of footwear.

According to reports, royal women are expected to keep their heels at six inches or under for two reasons: First, so they aren’t wobbling around while trying to walk at public appearances, and second, so they don’t appear too tall and this is something we expect they’ll stick to for this mourning period and for the funeral.

Kate, Princess of Wales usually sticks to a classic pointed court shoe shape and more recently her go-tos have been Emmy London’s Rebecca heels which come in different coloured suedes.

However, like Meghan she’s also worn pairs by designers such as Jimmy Choo and Aquazzura shoes with Meghan favouring ankle straps or unique detailing.