Lori Harvey didn’t have to always strut her stuff on the runway to make waves on the final day of New York Fashion Week.

The cameras and lights were snapping and flashing when the model and entrepreneur attended both the Michael Kors fashion show, which was then followed by an appearance to check out the new collection from Tom Ford.

Without question, she garnered the most attention, by stepping out to the Ford show in a daring and racy suede suit that she wore without a shirt, setting plenty of hearts fluttering with excitement.

Racy and daring: Lori Harvey, 25, arrived at the Tom Ford fashion show at Skylight on Vesey in New York City on Wednesday, which was the final day of New York Fashion Week

The suit consisted of loose-fitting, drawstring pants that flared at the bottoms enough to cover nearly her entire shoes.

The matching blazer came complete with a wide lapel, two side pockets, and a firm fit to her amazingly toned 5ft3in figure.

In a move that would take a healthy dose of confidence, the adopted daughter of comedian and game show host Steve Harvey went shirtless for her evening ensemble, which left plenty of cleavage out in the open.

As a result, it appeared she had at least two men by her side, acting as security guards, so that no one would potentially pull at her daring outfit. 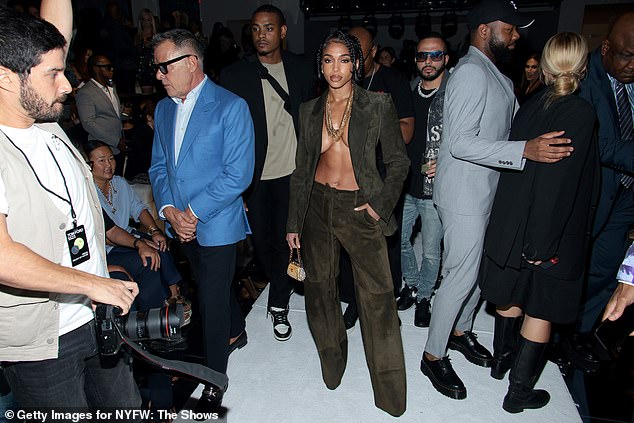 Attention grabber: The model and entrepreneur grabbed plenty of attention by wearing her dark suede suit without a shirt 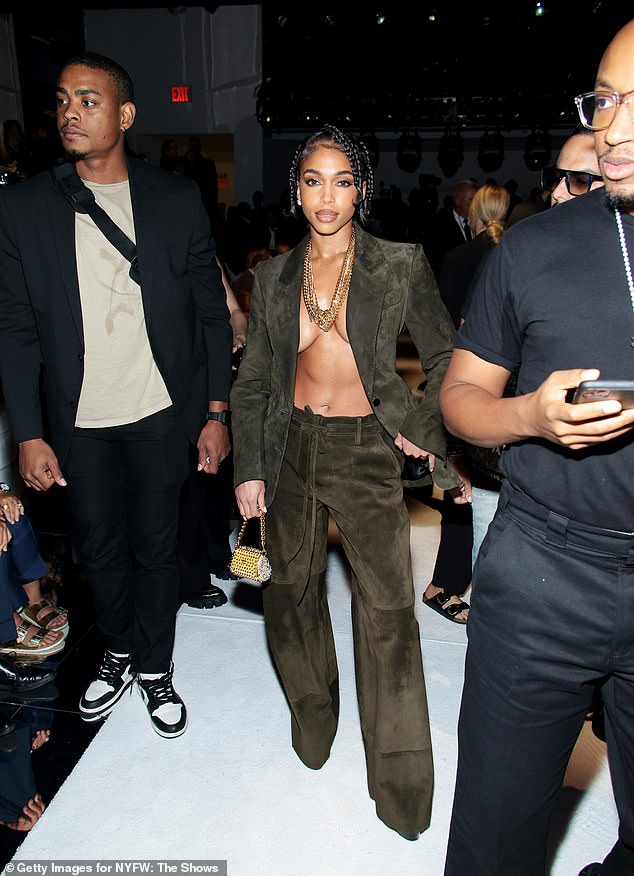 Head turner: The ensemble consisted of drawstring pants that flared out at the bottoms and a matching blazer that hugged her curves in all the right ways 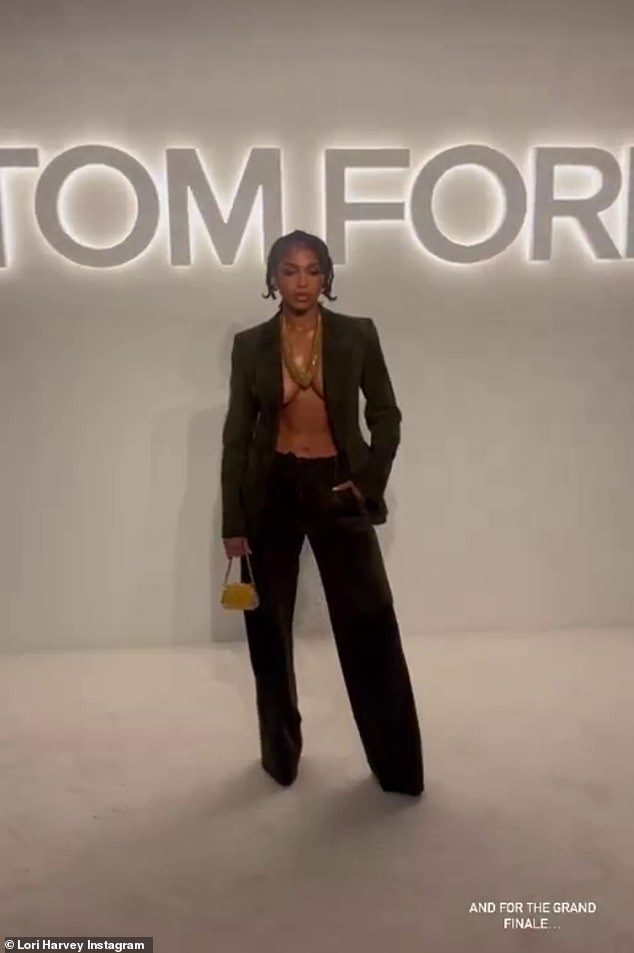 Grand finale: Harvey came out for what she called ‘the grand finale’ of the Ford show 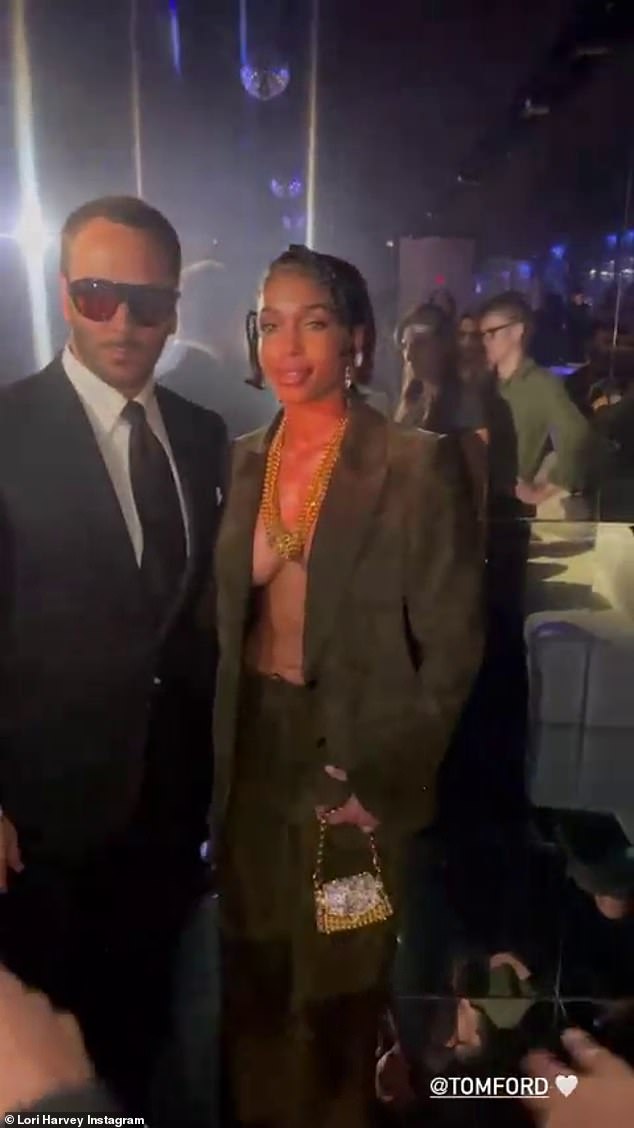 The man of the hour: The SKN by LH founder made a point of chatting with Tom Ford and posing with him for pictures

In a contrast from her earlier appearance at NYFW, Harvey had her long raven tresses styled into a series of short but thick braids that hung just short of her shoulders.

She rounded out her overall ensemble by carrying a tiny yellow purse that was only big enough to contain her very essentials and an assortment of necklaces that hung into her chest.

After taking in the new collection, with the help of the bevy of beauties who hit the runway, Harvey came out for what she called ‘the grand finale’ of the show.

Not long later she made a point of chatting with Ford and posing for photos in front a group of photographers. 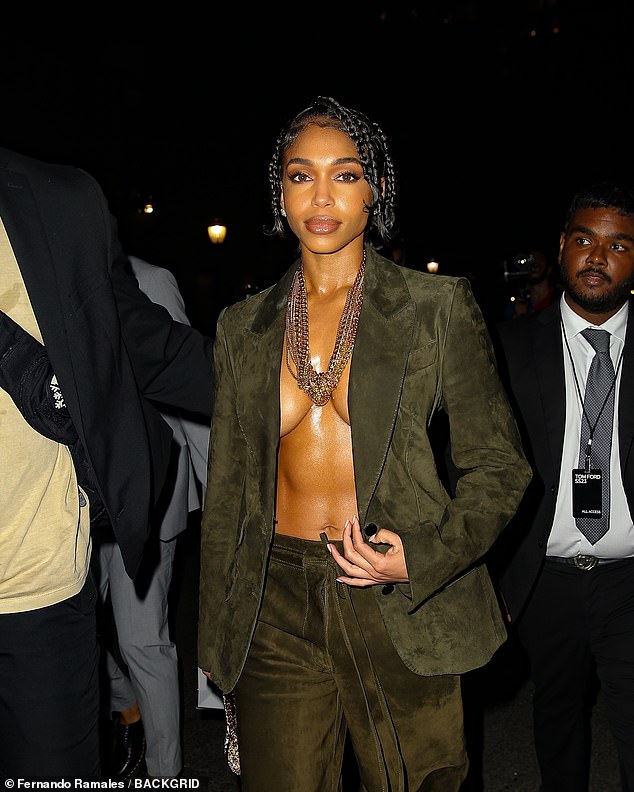 Making her way: The Tennessee native was led outside after the show by those men who were acting as security guards

Another round: The adopted daughter of Steve Harvey posed for more photos outside the venue 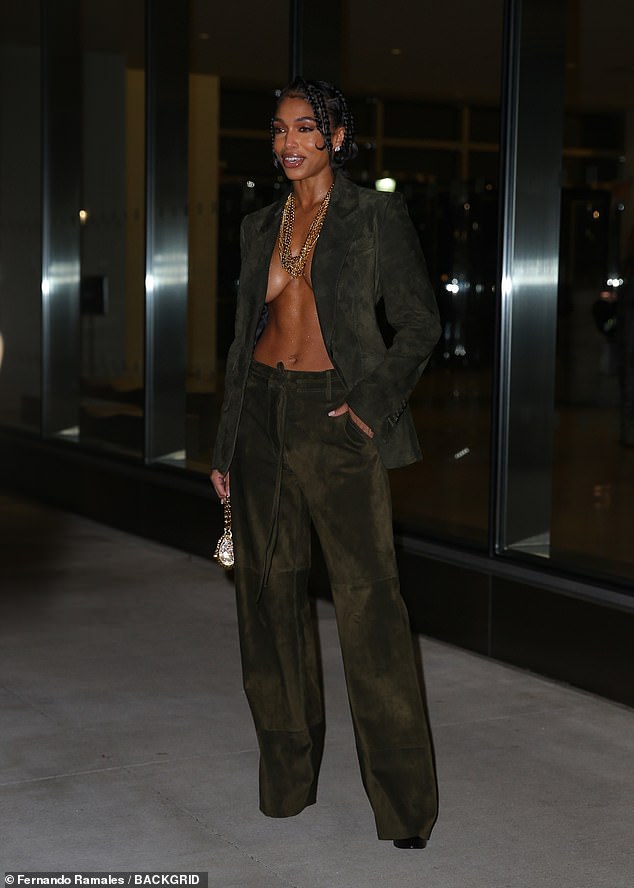 Added touch of style: The catwalk queen had her dark locks styled in super cool braids

Eventually, the founder of the skincare company SKN by LH was led outside by that group of men acting as security, all while the camera continued to shoot.

She would again stop for more photos before making her way along the street and seemingly to an awaiting car to take her to her next destination.

Earlier in the day, Harvey took in the Michael Kors fashion show decked out in a black and white-patterned minidress that she paired with a matching jacket.

In a move to added a bit of casual-cool style to the ensemble, she also wore a New York Yankees baseball cap over her hair, along with a pair of lifted heels. 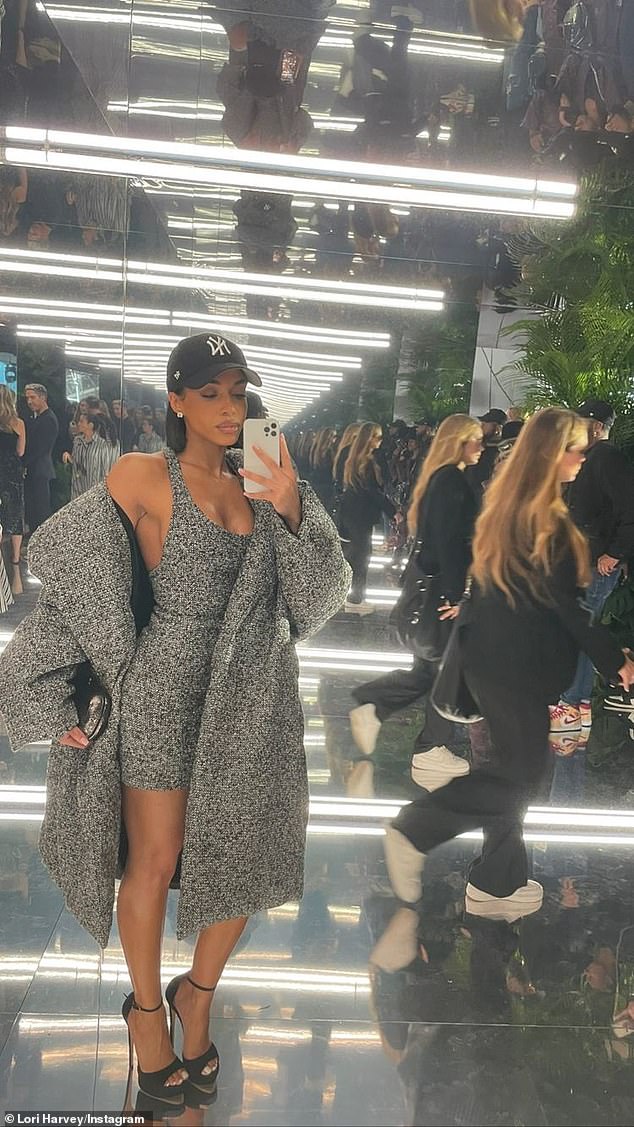 Making the rounds: Earlier in the day, Harvey took in the Michael Kors fashion show decked out in a black and white-patterned minidress that she paired with a matching jacket 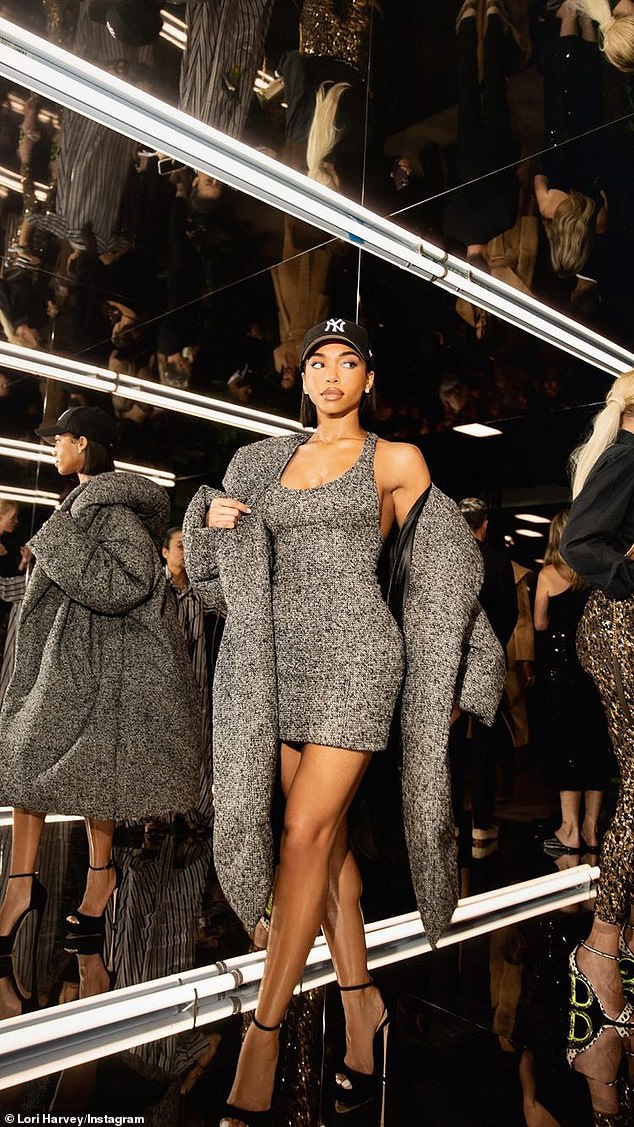 Stylish: Harvey stepped out in a black and white-patterned minidress and a matching jacket with heels, along with a New York Yankees baseball cap over her dark tresses 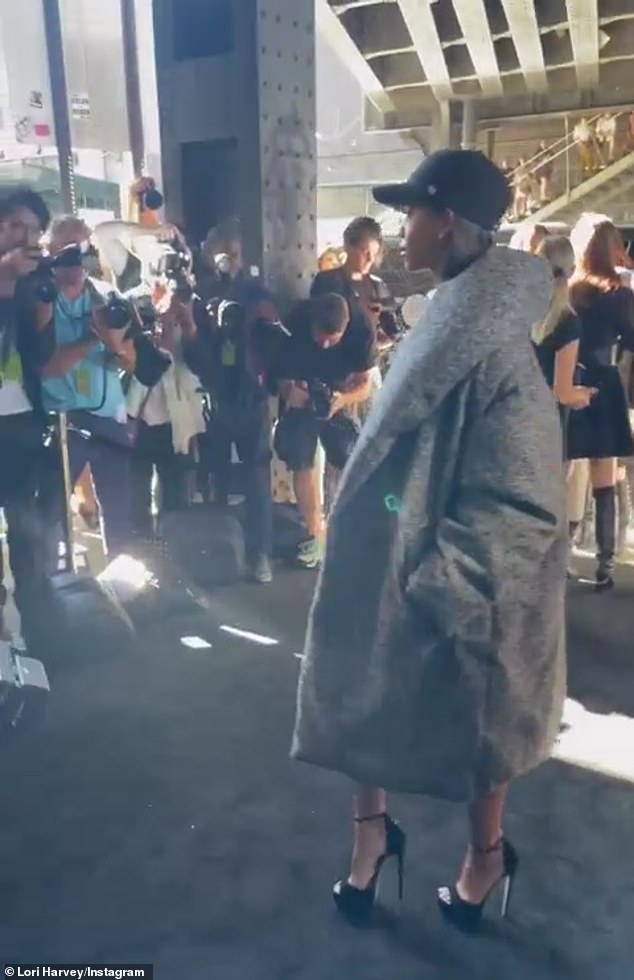 Frenzy: After taking in all the fashionable action, Harvey stepped outside the venue and had a sea of ​​photographers asking her to strike a pose for the cameras

‘You have done it again @michaelkors !!! Incredible show! Love you endlessly, thank you so much for having me,’ she gushed in the caption of an Instagram post.

After taking in all the fashionable action, Harvey stepped outside the venue and had a sea of ​​photographers asking her to strike a pose for the cameras.

Harvey’s history with Kors includes walking the runway for the American fashion designer during his shows in more recent years.

Along with her business investments, the Tennessee native is also known to some fans for her time dating Creed star Michael B. Jordan from December 2020 until this past June. 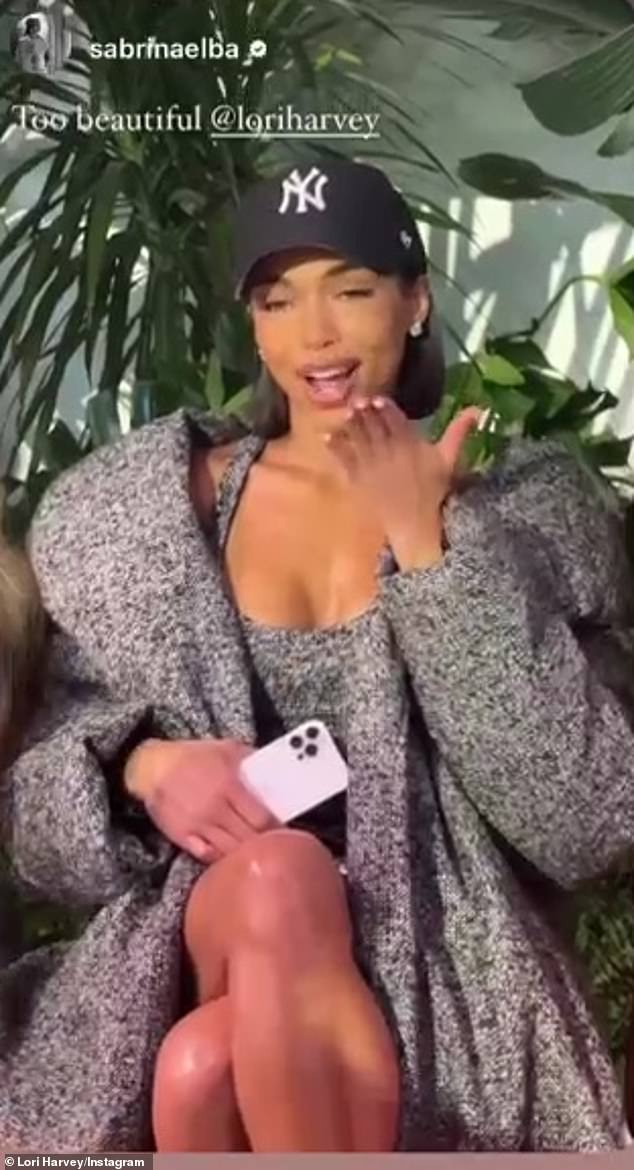 Harvey was known to some fans for having dated leading man Michael B. Jordan from December 2020 to June 2022