Kareena Kapoor Khan has been the reigning czarina of Bollywood ever since she stepped foot in the industry back in 2000 with her debut movie Refugee. Her commendable on-screen performance won her a Filmfare Award for Best Female Debut. The actress recently celebrated 22 years of being at the top of the industry as a leading woman. It was a widely accepted notion in the yesteryears that female actresses came with a shelf-life. However, Kareena Kapoor Khan has been instrumental in bringing about a much-needed change in the industry and has proven to be a stark contrast to the regressive notion. The actor recently essayed the role of Rupa in her latest movie Laal Singh Chaddha, whose life is essayed in the movie since she was a college student. In an interview with Filmfare, the The actress said, “With God’s grace, I will continue working for the next 20 years and proudly so at 50 or 60.” While being at the top of the game in Bollywood for two decades takes utmost dedication and hard work, Kh an pulls it off with charming ease.

It will be an understatement to say that Kareena Kapoor Khan has a huge fandom. Because for the ones who love tapping their feet to Halkat Jawaani and quote Poo from Kabhi Khushi Kabhi Gham in every other sentence, she is a moment in culture. However, she has been experimenting with a wide range of roles that has allowed her to not be typecast into a box. In Jab We Met, she played an effervescent Punjabi kudi, in Chup Chup Ke she plays the role of a mute girl, she essays the role of a sex worker in Chameli, in Heroine, she plays an actress whose career is spiraling downwards. Be it Asoka or Kabhi Khushi Kabhi Gham, both movies that were released in 2001, her roles have had a wide range.

Not only has the actress been an on-screen favourite but has had her moments in the sun off-duty as well. Kareena Kapoor is unapologetically herself in a society where women are made to feel like they have a lot to be sorry about. She doesn’t let success get to her head the same way she doesn’t take failure to her heart. In an interview with Filmfare, she famously said, “I wear my highs and lows equally with my collars up. Success or failure, I am what I am because of those films.”

Kareena Kapoor Khan is known to influence the trends of multiple generations, and as the style icon turns a year older, we take a look at some of the most popular trends.

Kareena Kapoor Khan made headlines when she became zero figure for her movie Tashan, and it instantly became a trend. Talking to a leading publication, she said that she was initially 68 kilos and lost 20 kilos to attain 48, which is when she gave the popular bikini shot for the movie Tashan. During the film’s release the size-zero size became all the rage in Bollywood, and it is reported that she worked her socks off to achieve her goal weight.

A series of superhit dance songs by Kareena Kapoor Khan also contributed to her widespread fame. Her solo dance performances included Fevicol Se from Dabangg 2 and Halkat Jawaani from Heroine. In the dance songs Marjaani from Billu Barber, Yeh Mera Dil from Don and Chammak Challo from Ra One, she shared great on-screen chemistry with Shah Rukh Khan. She oozed charm in songs such as It’s Rocking from Kya Love Story Hai, Chaliya from Tashan and Bebo from Kambakkht Ishq. Her recent hit dance songs include Tareefan from Veere Di Wedding and Laal Ghagra from Good Newwz.

One of the most popular works of Kareena Kapoor Khan is Kabhi Khushi Kabhi Gham where she essays the role of an ultra-glam college student Poo. Set in the backdrop of London, Kareena flaunts the trendiest crop-tops paired with flared trousers and backless outfits . Needless to say, the costume designing in the movie was way ahead of its times and remains relevant till date. The sequin and monochrome trend in the movie came into mainstream fashion about two decades later. Fashion takes the front seat in her portrayal of Poo . 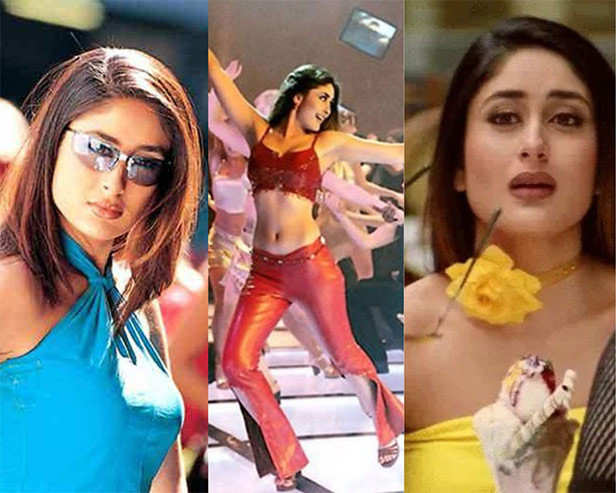 In her wedding with Saif Ali Khan, Kareena Kapoor looked ethereal in an heirloom sharara which was also worn by her mother-in-law Sharmila Tagore when she got married in 1962. However, the actress has also turned bride on many on-screen occasions . Three of those looks will always remain in our wedding mood boards and they include 3 Idiots, Veere Di Wedding and her recent outfit in Laal Singh Chaddha. In the movie 3 Idiots, Kareena donned a vibrant heavily embroidered orange lehenga designed by Manish Malhotra. In her on-screen wedding in Veere Di Wedding, Kareena looked regal in a glamorous off-shoulder, embellished yellow lehenga by Abu Jani and Sandeep Khosla. The lehenga belongs to the vintage collection and is 25 years old. In her latest movie Laal Singh Chaddha, Kareena Kapoor once again looks regal in a blush pink lehenga set with gold jewellery and minimal makeup. In all the wedding looks, she strays away from traditional wedding colours and creates a trend of her own. 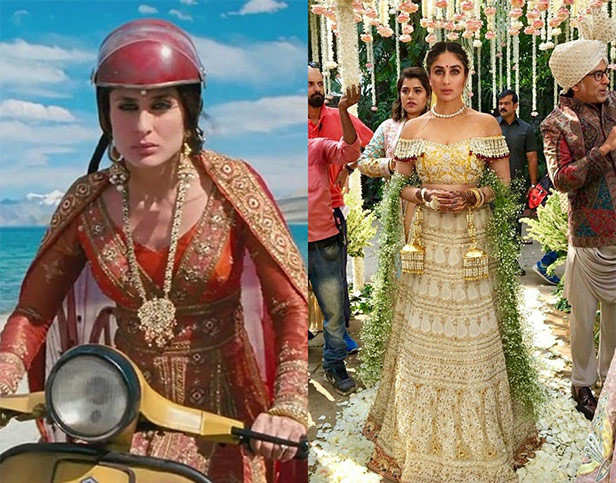 Fashion trends from Jab We Met

Kareena Kapoor Khan’s wardrobe in the movie Jab We Met was carefully curated and progressed with her character arc. In the first half of the movie, we see her in vibrant hues that represent a carefree and bold Geet. As the movie progresses and Geet finds herself heartbroken, we see the actress in a no-makeup look dressed in pastel hues. The movie ends with an engagement and once again we see her donning vibrant embroidered patiala pants and crop top in the song ‘Mauja Hi Mauja’. The wardrobe for Jab We Met became an unprecedented trend and is popular to date. It featured statement Patiala pants, short kurtis paired with denim, phulkari scarves, and much more. One of the most remarkable looks was when she was seen in a black corset top, a long red skirt, and a white shirt with voluminous sleeves in the song Yeh Ishq Hai. For the song Nagada Nagada she donned a heavily embroidered patiala salwar with a short kameez 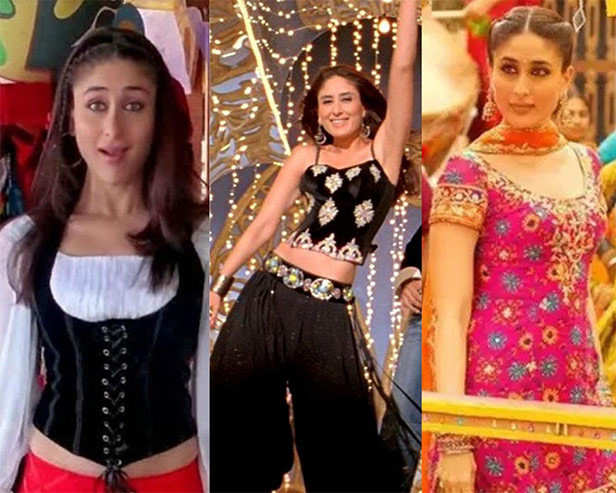 Halkat Jawani from Heroine was one of the most popular dance numbers of the time. Along with the catchy moves, the outfits worn in the song became widely popular. The most popular one was the fuschia-coloured saree that featured a string thin pallu and a black blouse featuring mesh details designed by Manish Malhotra. With the release of the movie, the string thin pallus became a raging trend. 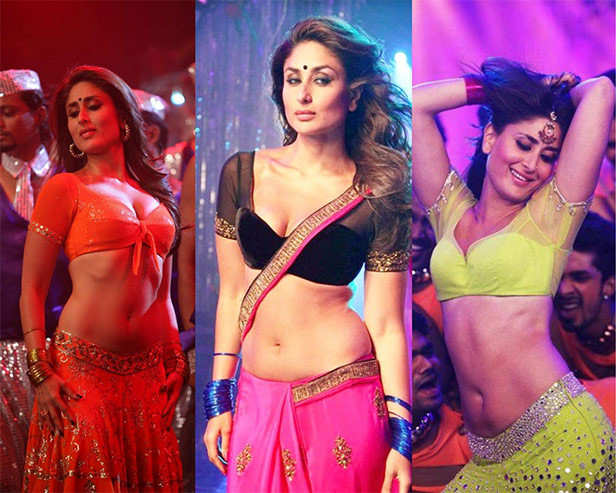 The maximalist wardrobe in Heroine

Kareena Kapoor Khan again made headlines when she starred in the movie Heroine where she portrayed the role of an actor whose career was on the downward slope. It has been reported that the movie featured costumes sourced from all around the globe that was one of the most expensive of that time. She was seen in more than 130 ensembles by esteemed designers all over the globe. She channelled her inner diva in mesh sarees, sequin dresses, backless cocktail dresses and exquisite jewellery.