Despite the establishment of a new South Australian fashion festival and a collaborative workspace in North Adelaide, local industry professionals say the Adelaide fashion scene can only punch above its weight if proper investment is made into all skills in the supply chain.

The South Australian fashion industry is on the brink of something very good.

In an effort to survey the current landscape of our state’s fashion industry, CityMag spoke with 10 industry professionals – designers and fashion business owners of all shapes and sizes, from small Depop creators to internationally successful brands.

According to their appraisal, we could be on the cusp of another golden era. But it’s not only those from within the industry singing its praises.

This article first appeared in our Spring 2022 Fashion Edition, on streets now

In August 2021, Deloitte Access Economics and the Department for Innovation and Skills published a report titled ‘Economic value of creative businesses in South Australia’, which delivered a shocking evaluation of the South Australian fashion industry.

From 2017—18, the period when information for the report was compiled, 1,089 fashion businesses operating in South Australia contributed an estimated $218 million in value to the South Australian economy, and employed 2,576 FTE workers.

“The retail and fashion industry in South Australia comes second to wine. And that’s not something that anyone knew – none of us,” says Cristina Tridente, designer and founder of Couture+Love+Madness.

Cristina knows better than most, though, the potential of our local industry. She was once the creative director of the Adelaide Fashion Festival, and is a founding board member of the newly assembled South Australian Fashion Industries Association (SAFIA).

Though it was only officially established in 2021, SAFIA’s beginnings date back to 2015, when Cristina travelled to Adelaide’s sister cities around the world as part of a South Australian delegation.

“Everyone else had a board, but the fashion industry didn’t,” Cristina explains. Her thought was that if a South Australian fashion association existed, it could “strike up a deal for export with these other sister cities that we’re working with “.

It’s taken longer than expected, but SAFIA now functions as a fashion industry voice for our government to talk to. The entity consists of independent industry and educational leaders and those from educational organisations, such as Cristina; Helen Jansson, principal lecturer for Fashion, Costume and Textiles at TAFE SA; Julia Sumner, CEO of Acler; Scott Foulder, head of product development and studio coordinator at RM Williams; Emily Riggs, founder and creative director of Iris & Wool; and Stacey Pallaras, founding publisher of Cocktail Revolution.

“Whether they have studied at TAFE SA or they’re self-taught, want to be a designer or stylist, or they just like fashion, I hope SAFIA will be a portal of information and community.”

This is also what smaller players within industry are calling for. 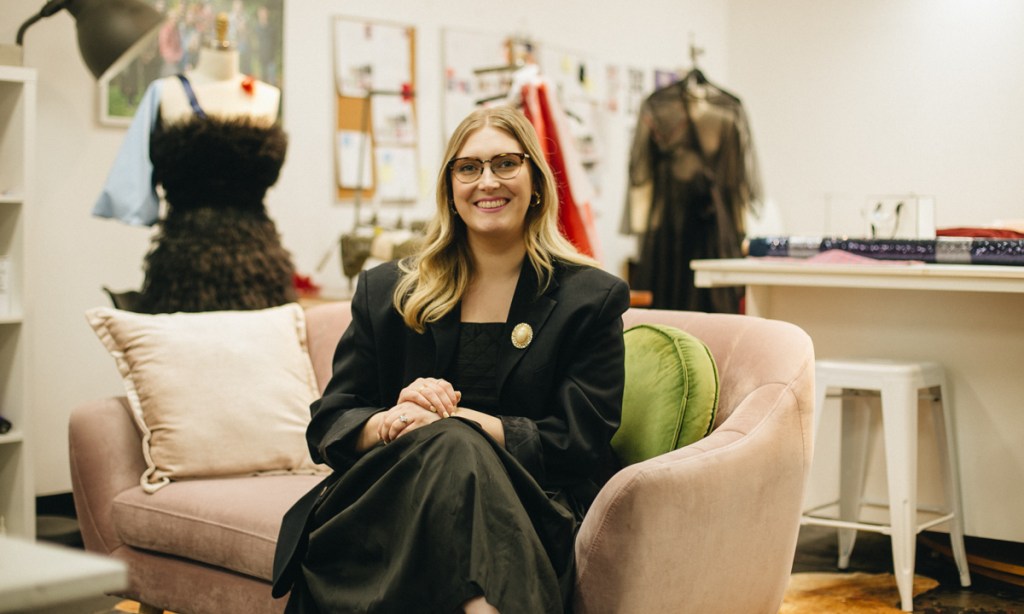 Like most South Australian industries, fashion operates with a heavy dose of parochialism. Designers and creators working here have a passion for their state and a desire to give back.

“As a proud South Australian, I’m passionate about remaining in, and contributing to, our state through the label,” says Abby Potter, designer and founder of House of Campbell.

Abby’s team samples everything in South Australia, either in the CBD-based atelier, or through Adelaide-based machinists, pattern-makers and factories.

She says the creative network in Adelaide – made up of machinists, factories, garment technicians, fabric suppliers and creative professionals – is talented and supportive.

“Rather than ruthless, cutthroat competition, there is a real sense of peer support and collaboration, which is beautiful to be a part of,” Abby says.

That said, she and her team are currently looking to interstate and international factories to expand their supply chain and grow as a business. Like Abby and other local designers, consumers also want garments constructed and made from materials produced in South Australia – or at least in Australia.

The struggle faced by most fashion businesses locally is there is not currently the infrastructure to support such demands. Our state was once a buzzing manufacturing hub, but the global trend of moving production offshore has had a significant impact.

“Slowly, we got rid of all of it, we moved offshore. But now, I think COVID has really shaken things up. People want to know where their clothes are from.” 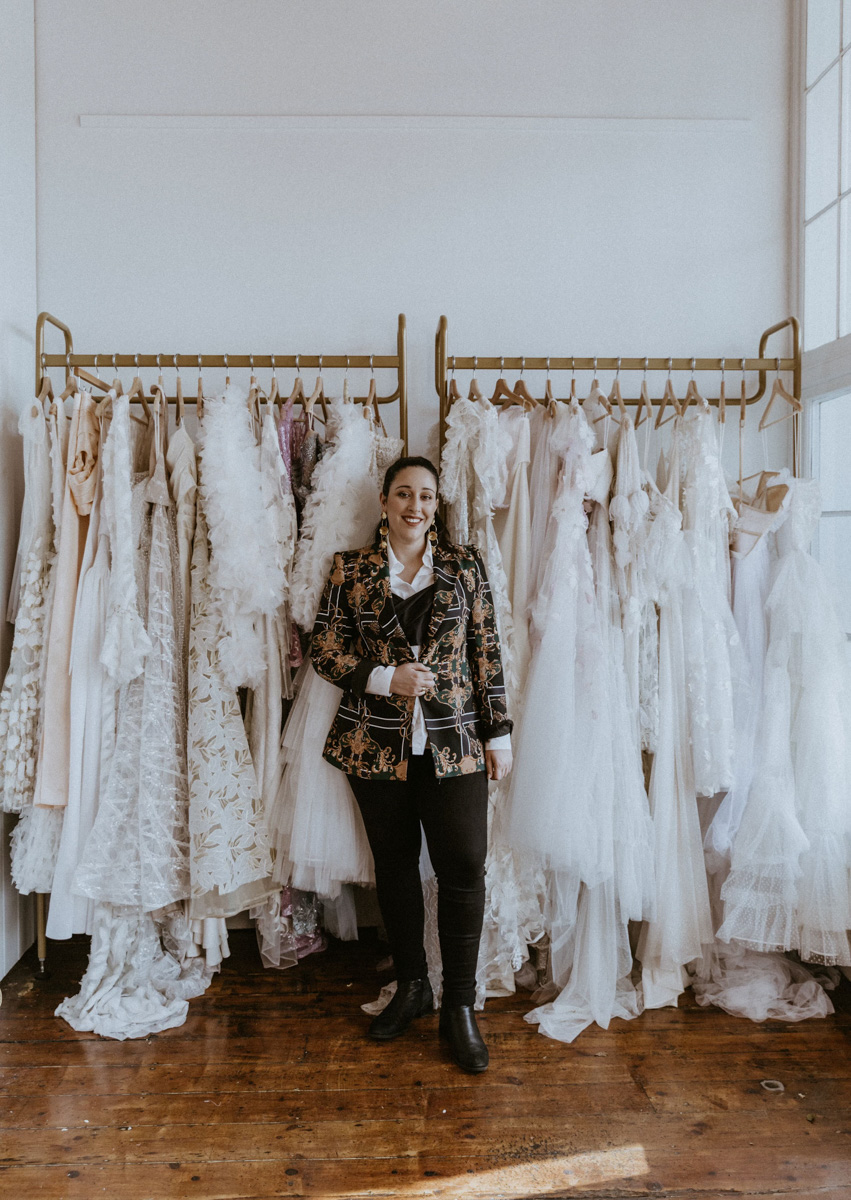 SAFIA board member Helen Jansson says the industry is “growing at the fastest rate I have seen”, but it can only go so far without support to build up key elements of the supply chain.

Autark designer and founder Sophia McMahon says “more often than not, when I ask my machinist to do more work, they say, ‘We’re so busy!’ and it takes time to slot me in”.

“I think part of the issue is availability of those people with skills,” she says. “I think that a lot of people are more drawn to the more glamorous side of design and pattern-making, but there are not as many people around with the incredibly valuable skills of machining and actually putting the pieces together.” 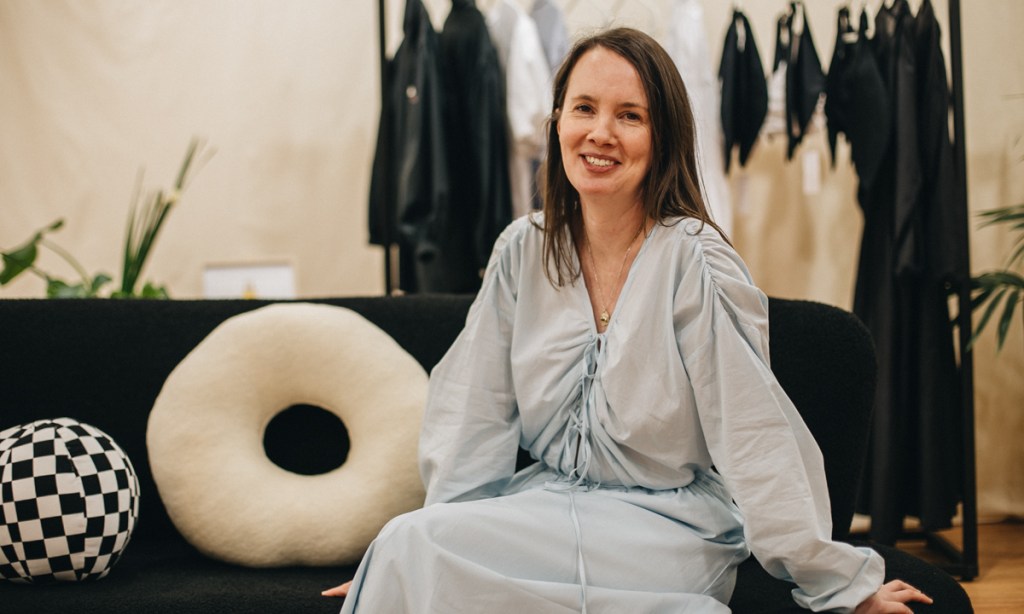 Designer Lauren Crago built Solomon Street, her small, eco-friendly apparel business, on the principles of preferencing local and operating with ethical best practice standards. But in doing so, she has found maintaining these standards to be an untenable business model.

“Solomon Street was manufactured at an amazing local factory until we were approached to provide wholesale products to an online retailer, which was an exciting marker of growth for us,” Lauren says.

“It was at this point that I realised that in order to meet the retailers profit margin requirements, I would have to sell my product for less than it was costing me to make it. This was the leverage point where I decided to put the time into searching for a factory offshore. This was the hardest decision I have had to make in the time running my business.”

Abby stresses that the industry needs support from government in order for it to see continued success – and not just our designers, but also our local manufacturers.

“Well placed, strategic funding support can play a crucial role in keeping our work onshore where possible, retaining key skills and capabilities as well as stimulating employment in our sector,” she says. 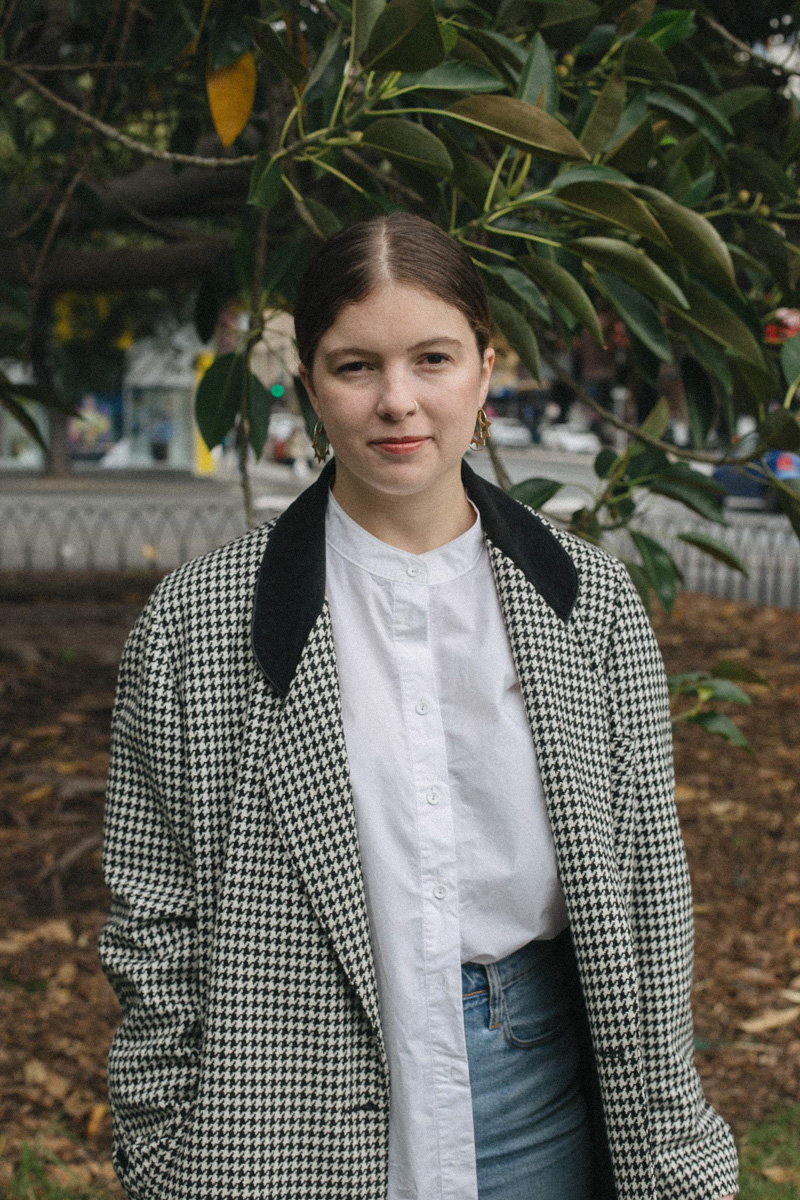 Naomi Murrell, designer and owner of the self-titled jewellery and apparel brand, says “it would be amazing if the government could team up with industry to develop a state-of-the-art technology and manufacturing hub for local businesses to use” .

“Small designers and even medium-sized labels don’t have the capacity to build industry alone, but collectively there is so much scope to group source or produce popular basic fabrics together,” Naomi says.

“It would require forethought and commitment from designers and businesses within the local fashion ecosystem, but it would be so much more efficient and environmentally responsible than the current alternative.

“The government needs to value design skill as highly as they do harvesting grapes. Design can be the ultimate problem-solving tool for the next generation, not to mention its role in contributing cultural value to our city and state. We want people to have a uniquely Adelaide fashion experience and to be able to export that, like we do Haighs or Penfolds.” 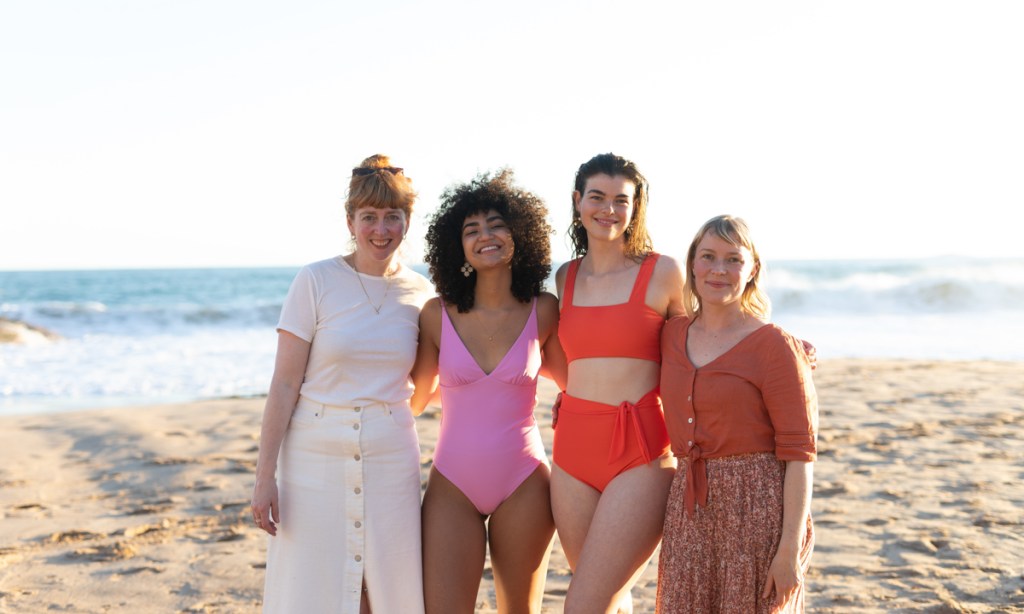 Naomi Murrell (left) on a shoot for her swimwear collaboration with Coco & Shy. This picture: Supplied

A vision of a healthy South Australian fashion industry made up of both technical craftspeople and designers is easy to imagine, but more difficult to conjure into the physical world. There are some people looking into it, though.

“You look at companies like RM Williams – multimillion dollar companies – they are trying to bring everything back on shore. They’re looking at options,” says Cristina.

“But it’s hard. You need companies that have the capabilities to do what different companies need. These are large companies, not small ready-to-wear kind of labels. Even Aus Fashion Group, they’re looking for options to bring some [manufacturing] back onshore.”

CityMag reached out to the State Government for comment but did not receive a response by deadline. There is no indication of a government and industry created manufacturing hub currently in the works, but there have recently been new forms of investment in South Australian fashion – for the platforming of local fashion designers and retail areas.

SAFIA has worked with the Adelaide City Council to establish a pop-up studio, retail and events space in North Adelaide Village, called The Fashion Est. The initiative aims to support the fashion industry by providing a collaborative workspace and retail pathway for emerging fashion designers .

Those participating in the project include Autark, Petar Prodanović, Josephine-Rose, Peloponnese the Label, Lian by Lian, and Katya Komarova. 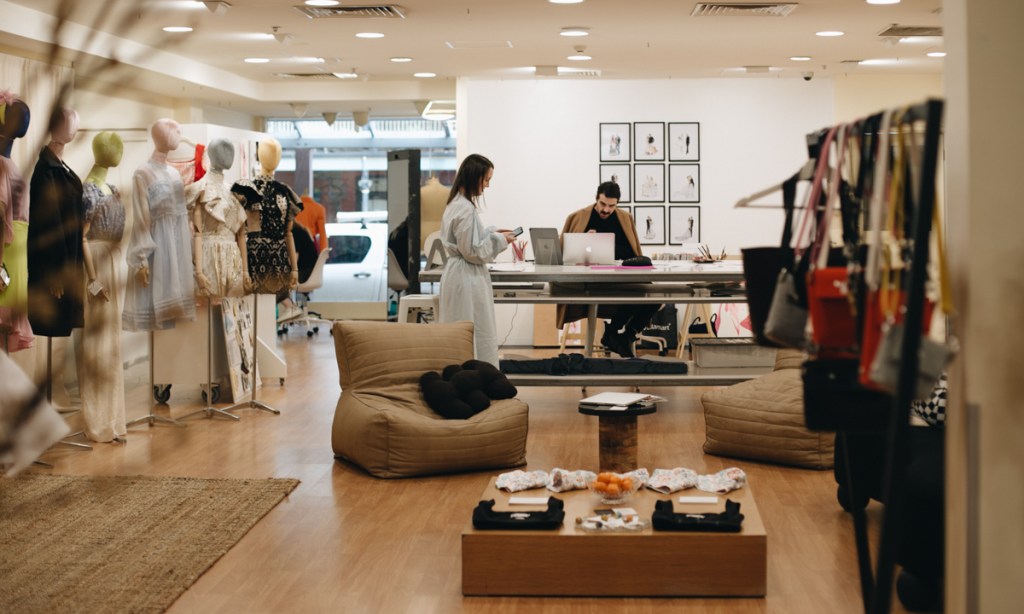 The Fashion Est. in North Adelaide

“The fashion industry is incredibly important to Adelaide… these young designers are creating some incredible works and this council initiative is giving them a platform to take their business aspirations to the next level,” says Lord Mayor Sandy Verschoor.

A new iteration of Adelaide Fashion Festival will also return to the city this October. Now called ADL Fashion Week (AFW) and funded by the Adelaide Economic Development Agency (AEDA), the reinstated and revamped festival has the support of SAFIA, and used local talent to produce the marketing campaign.

“The event will celebrate Spring/Summer fashion, with Adelaide’s Biggest Shopping Event in Rundle Mall and Rundle Street as the centrepiece of the AFW Program.”

From 6—9 October, the AFW program will include “a schedule of citywide activities, events and pop-ups working in collaboration with emerging and established designers and brands,” Ian says.

This renewed focus on community support and engagement is one element of what the industry is calling for – an opportunity to platform and bring industry peers together. Because, as every single person we have spoken to for this story has reiterated: together is better.

“This is what we need more of,” says Cristina.

Through this additional opportunity for industry-wide discussion, the hope amongst South Australian fashion leaders is the industry will forge stronger bonds and, in turn, a stronger collective voice.

Perhaps then the government will recognise the industry’s talent and offer other kinds of support, such as boosting local manufacturing and production, they say will help create the next golden era of South Australian fashion.